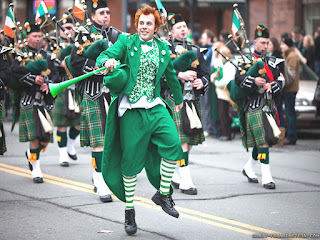 Wednesday Night Trivia at Professor Thom's  this week will feature "Ireland Trivia," seven questions about the Emerald Isle in honor of this Friday being St. Patrick's Day. The questions will also be multiple choice, the first time we have done multiple choice since my return.

The Q Train lightning round will be "States Largest City Trivia." I will give you the names of ten US states, and you have to tell me what the largest city by population is in that particular state.

The Sneak Peek question for this week is:
"What musical instrument is featured on Guinness' logo?"

We get going at 8:30 PM tomorrow. As you all know, we have gotten some really awful weather on Tuesday, but fortunately it is not as bad as originally forecasted for New York City. The subways should be up and running above ground in Brooklyn on Wednesday, so I should be in for Trivia. If anything changes that, I will inform you here or on our Facebook group page. See you tomorrow for a great night of Trivia!
Posted by The Omnipotent Q at 11:17 AM