Can the Red Sox Play the A's More Often? 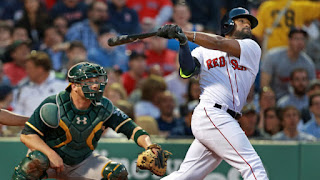 That was one hell of a lopsided series. It was historic, too.

The Red Sox hitters took the Oakland A's pitching staff out to the woodshed the last three nights.

The Sox scored 40 runs in 24 innings of offense. They scored 14, 13 and 13 runs in the three games, and it is the first time in franchise history the Sox scored 13 or more runs in three straight games. (And somehow, the Red Sox were trailing in two of the games, all before the third inning, that is.) And they put up crooked numbers throughout the series: 3 on Monday and 4 each on Tuesday and Wednesday.

Jackie Bradley was the hitting star of the series, and currently the hottest hitter on the planet. He hit three home runs, drove in 13 (six in the first and third games). And he currently has the longest hitting streak in MLB right now, at 17 games. He went 10-for-18 in the series, from a guy batting in the nine hole. It maybe time to move JBJ up in the order.

Seemed like EVERYONE in the Red Sox lineup had their hitting shoes for this series, against an Oakland A's staff that has been bloodied and battered on the road trip they are currently on. (They gave up 11 runs in Baltimore on Sunday, for a mind-blowing 51 runs surrendered in four games.) The series may best be remembered for the 468-foot blast by Hanley Ramirez in the second game, which was the second longest home run of the year so far. (BTW, are you still worried about him playing first base? Haven't much from that crowd lately.)

You can say all you want about the Sox beating up on teams like the A's with such inferior pitching, but in the end, these are the games you need to stick in your pocket if you want to contend for a title. The struggling Houston Astros come in for four games this wekend, with Cy Young Award winner Dallas Keuchel facing former Cy Young winner David Price.

I expect the scores to be a bit lower tonight, but the way these boys are hitting right now, who knows?
Posted by The Omnipotent Q at 11:35 AM