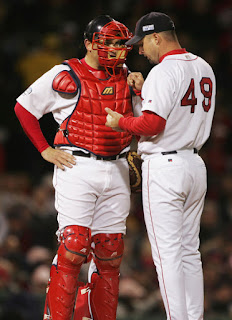 It was 10 years ago today that one of the oddest and strangest moments in Red Sox history occurred: the Red Sox re-acquired catcher Doug Mirabelli from the San Diego Padres for catcher Josh Bard and minor league pitcher Cla Meredith.

Tim Wakefield was scheduled to start for the Red Sox against the Yankees on May 1, 2006. (It was also the return of Johnny Damon to Fenway for the first time in a Yankee uniform.) Bard was having all kinds of trouble catching Wakefield's knuckleball, and in what looked like a panic move, GM Theo Epstein pulled off the trade, and had to get Mirabelli in time for the game that night from San Diego. It evolved into a police escort for Mirabelli when he landed in Boston, and he even had to change into his uniform in the back of the patrol car.

The incident from 2006 has been remembered on many sites this past weekend, including Sons of Sam Horn, Deadspin, and The Hardball Times. And many of these sites have linked the post I put up back in 2007 that has become by far the most watched post on my blog: "A Day In The Life of Doug Mirabelli. On Friday, I had over 1,500 hits on the my site, the most ever. And I thank them for it.

Here is the Hardball Times article, which gives a great breakdown on the entire trade and its aftermath.
Posted by The Omnipotent Q at 11:57 AM