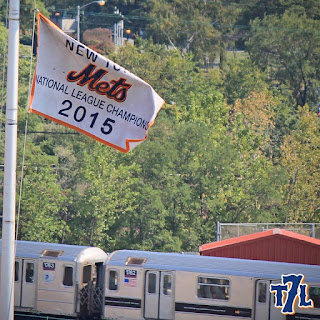 I never, ever would have predicted this.

Before the playoffs began, I picked the Mets to go to the World Series. I thought it would be a tough road, but if their pitching held up, I thought they'd have a good shot at making it to the Fall Classic.

I just didn't think they'd do it so dominantly.

The old Connie Mack adage certainly applies here: good pitching stops good hitting. And boy were the Mets pitchers throwing lights out. They allowed a terrific Cubs lineup just eight total runs in the four-game sweep. The young dynamic trio of Matt Harvey, Noah Syndergaard and Jacob deGrom were simply spectacular, living up to the hype that has surrounded them. The Cubs lineup simply destroyed the Cardinals in the NLDS, blasting 12 home runs against the team with the best record in baseball in a 3-1 series win. They hit just four home runs in the NLCS.

And what can you say about Daniel Murphy? A home run in six straight postseason games, a new record. Seven overall. Easily the NLCS MVP. He hit just 14 home runs in the regular season, but is becoming otherwordly in these playoffs, just when his team (and bank balance) will benefit most. He is a free agent after the season and will be high in demand when the World Series is over.

This Mets team reminds me so much of two other teams: the 2004 Red Sox and the 1969 Mets. Both teams won the World Series with incredible starting pitching, shutting down arguably the two best lineups in MLB in those years. And like in the 2004 World Series, the Mets were never trailing once in the four-game sweep.

Cubs fans are naturally depressed after seeing their team go down so meekly in a sweep (and not fulfilling the "Back to the Future II" prophecy). But take heart, fans of the North Side. This is an awesome Cubs team that won 97 games in the regular season. They are young and vibrant, and with some more pitching help, they could dominate in the NL for years to come. It's now been 107 years since the last Cubs title, but you may not have to wait much longer.

Back to the Mets. Game 6 of the ALCS between the Kansas City Royals and Toronto Blue Jays is tonight, and I still like KC to win it. But if you are in the Mets position, I think they'd rather face the Blue Jays. Both teams have awesome lineups, but the Royals' pitching is much better, especially the back end of their bullpen. If the Mets keep pitching the way they have, there will simply be no stopping them, no matter which team takes the AL pennant.

(With thanks to the good folks at The 7 Line Army for the photo.)
Posted by The Omnipotent Q at 10:54 AM