A Glimpse of the Future in Arlington Last Night 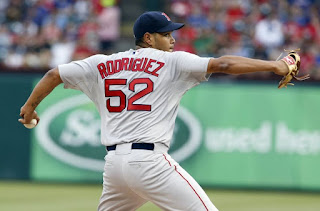 The lefty went 7 2/3 innings, allowed just three hits and two walks, no runs to a hot Texas Rangers lineup. He struck out five, and was never really in any serious trouble throughout the game. He showed lots of poise, and never seemed overwhelmed or intimidated.

It was the best MLB debut by a Red Sox starter since Billy Rohr's legendary near-no-hitter against the Yankees in 1967, when he pitched a shutout.

Even before Rodriguez' start last night, manager John Farrell said that no matter how it went that he would be returning to Pawtucket after it was over. But really, how do you send him back now?

Granted this is just one start, and he hasn't won any Cy Young Awards yet. But for a much-maligned starting rotation that has been much better of late, I don't see how you send back just yet. Rodriguez has earned a second look at the MLB level. He will probably be sent back at some point. But give him that first start at Fenway next week.

The moribund offense also came alive last night, especially Hanley Ramirez, who hit a bomb of a home run off Nick Martinez last night for the second Sox run. It was also nice to see the struggling Blake Swihart get two hits and drive in two runs that put the game on ice in the 8th inning.

It's been a slog of a season so far, but Eduardo Rodriguez sure gave Red Sox fans something to hope for last night. There's a long way to go, but the future may have been on display in Arlington, Texas last night.