So Pete Rose Wants Back In 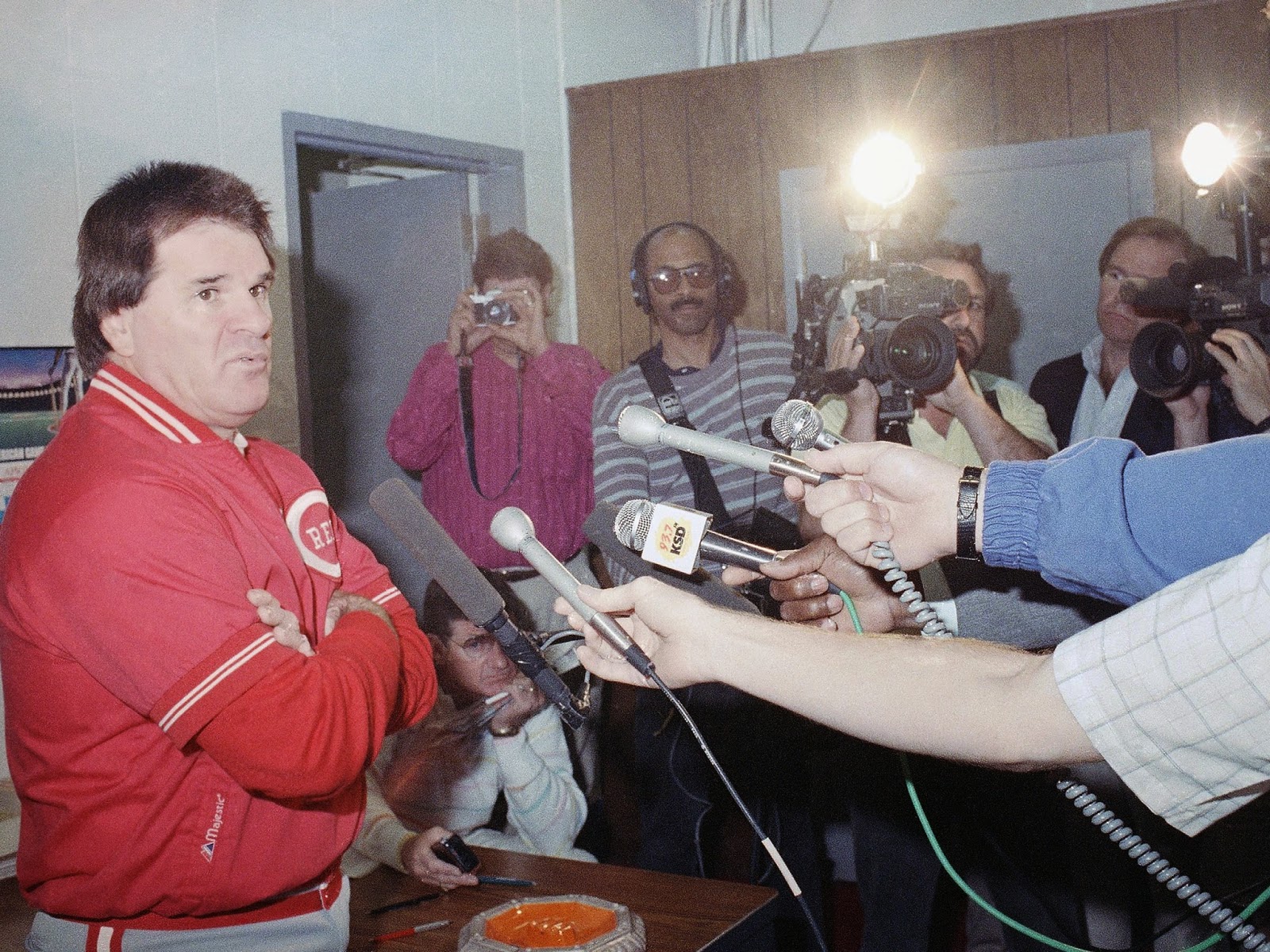 I haven't written much on baseball so far in this new year of 2015, but with 13 days to go until the season gets under way, and the cold weather finally abating, let's do it!

Earlier this month, Pete Rose made his intentions known that he is applying for reinstatement, after being banned since 1989 for betting on baseball. With a new commissioner at the helm in Rob Manfred, he figures to try and strike while the iron is hot and hopes that the new commissioner will be sympathetic to his case.

Manfred announced he will give Rose's case a look, but has not hinted in which direction he will go.

We all know the facts of Rose's banishment. He was basically caught red-handed having placed bets on baseball while manager of the Cincinnati Reds, and screamed for years that he never actually did it. He says he accepted the lifetime ban with the idea that after one year he would file for reinstatement. He also figured that he was still eligible for the Hall of Fame at the time, so that wouldn't be affected. (The Hall of Fame then banned all players on the Permanently Ineligible List shortly thereafter.) But Bart Giamatti, who rightly gave Rose the boot, died one week after the whole sordid matter ended, and the two commissioners that followed him, Fay Vincent and Bud Selig, kept the ban in place.

Rose lied in his deposition in 1989, and smeared the reputations of the men who brought the evidence against him 26 years ago, and has never offered any kind of apology to them.

Everyone in baseball knows that betting on the game is the sport's mortal sin. Every locker room in MLB has signs posted about that. The Black Sox scandal of 1919 came close to sinking the sport.

And have you noticed there has not been one case of illegal betting on baseball by anyone in MLB since Rose was banned?

I was in Rose's camp in early 2000s that he had served a long enough sentence for this case, and maybe it was finally time to reconsider his ban. But then in 2004, simply to sell yet another autobiography he'd written, Rose decided to come clean and admit, "yeah, I bet on baseball." For 15 years, he insisted to all his loyal fans and supporters that he hadn't bet on the game, and it was all trumped up by MLB.

And to make more money, Charlie Hustle admitted he hustled the fans. Treated us all like chumps.

So as far as I am concerned, Pete Rose can stay banned from MLB.

Listen, the Hall of Fame has plenty of members of rather dubious character, and the PED scandals have really played havoc with the election process. But that's a whole different story. I'm sure Rob Manfred will give Rose a shot here, but I bet he is in no rush to make any kind of ruling.

Rose doesn't have my support. And many Hall of Famers feel the same way. Everyone knows the rules. YOU DON'T BET ON MAJOR LEAGUE BASEBALL. He knew that, did it anyway because he was (and probably still is) a degenerate gambler. He of course merits induction for what he did as an MLB player.

But he ruined his career after he became a manager. I have always felt that somewhere down the road he will be reinstated and will enter the Hall of Fame by way of the Veterans Committee. But let it happen after he dies, so he's not there to enjoy it.

Sorry, Pete. No sympathy from me. You treated us like fools for years. Don't bet (pun intended) on getting back in MLB's good graces. Let your cries for reinstatement fall on deaf ears.
Posted by The Omnipotent Q at 10:51 AM

I say allow him to at least be on the ballot but the baseball writers are so weird that they would never vote him in. He currently lives in Las Vegas. Why should anyone believe that he is sorry and his gambling days are behind him? Keep in mind that I'm a huge Cincinnati Reds fan.

I think Rose will be allowed on the ballot sometime soon. His absolute lack of contrition towards those people he's slandered over the years fully puts me in the "keep him out" camp. It would be interesting to see how the Veterans Committee would handle this.