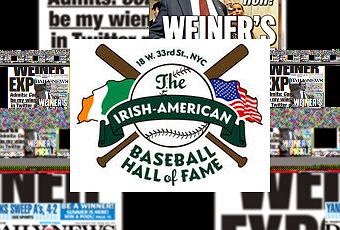 My friends at Foley's NY Pub and Restaurant (where I do Trivia every Sunday night, plug, plug!!) announced this past week their newest candidates for the Irish American Baseball Hall of Fame, and they include three individuals with connections to the Red Sox over the years.

One is former player and 2004 World Series champion Kevin Millar, another is current Red Sox  radio announcer Dave O'Brien, and the third is MLB Hall of Fame manager Joe McCarthy (who managed the Sox after his long successful tenure with the Yankees in the late 1940s).

There are eleven candidates on the 2015 ballot, from the groups of Former Players, Broadcasters, Managers and Executives. Here are the eleven up for consideration:


The Hall of Fame is located inside Foley's, at 18 West 33rd Street. It was founded by Shaun Clancy in 2008 to honor those connected to MLB of Irish descent. The candidates to be enshrined in 2015 will be announced in April.
Posted by The Omnipotent Q at 10:59 AM