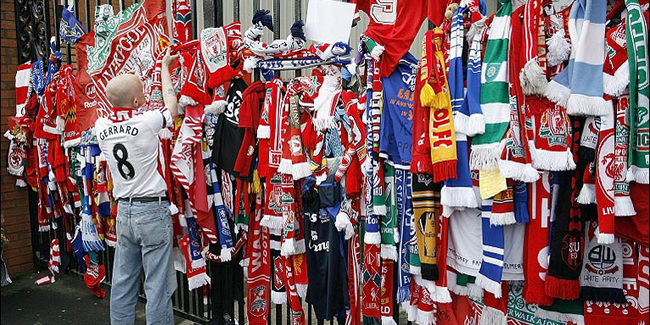 This coming April 15th will mark the 25th anniversary of the Hillsborough disaster, when 96 Liverpool fans were killed at Hillsborough Stadium in Sheffield during the FA Cup semifinal between Liverpool and Nottingham Forest.

There will be all kinds of tributes to the lost Liverpool supporters (I'm looking forward to seeing ESPN's 30 For 30 special about the tragedy), and the club will be marking the day with a memorial service at Anfield.

And the club is asking supporters from around the world to send in scarves, regardless of team or sport, and the scarves that are sent in will form a "96" on the pitch during the service. You can also write a note with your donation in support of the Hillsborough families.

I will be sending in a Red Sox scarf I have in memory of those lost, from the club that is cousins with the great English side.

Here's more info about the tributes of April 15th.

If you'd like to send in a scarf to Liverpool FC, here is the address to send it to:

The club requests that the scarves arrive by April 8th, so that they are assured of a place in the tribute.
Posted by The Omnipotent Q at 11:23 AM