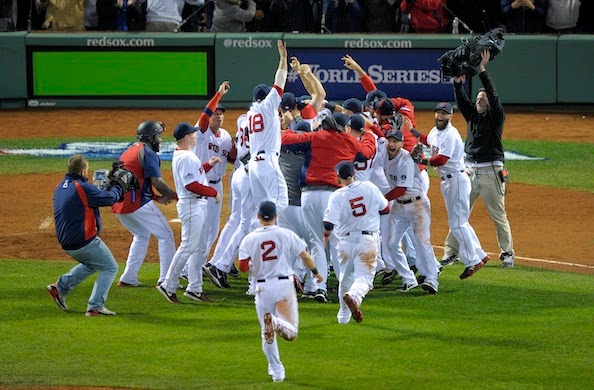 The Red Sox will begin the official defense of the 2013 World Series championship tomorrow at 3 PM in Baltimore. It will be the third time in my lifetime the Sox will go through a season being called "Defending World Series Champions."

I won't make any predictions regarding this season (I tried and failed badly last season so I've learned my lesson). I am quite optimistic about the Red Sox going back to the postseason this year, but of course many things have to go right for that to happen.

Anyway, the Sox cut down their roster yesterday, and here are the 25 players who will go north as defending champions, with six new additions (in italics) since the Sox won the 2013 Series:

The Red Sox will play three in Baltimore, including Wednesday and Thursday nights, and will open the 2014 season on Friday afternoon at Fenway against Milwaukee and unfurl the championship flag. I will be on hand for it, and I can't wait to be a part of it.
Posted by The Omnipotent Q at 11:02 AM