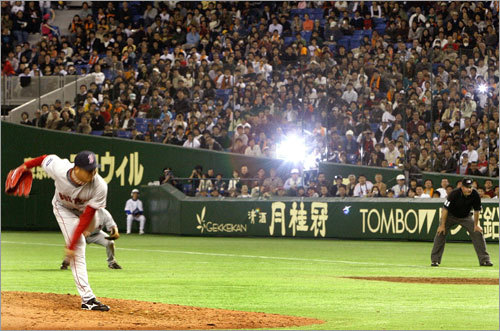 The Red Sox won their second exhibition game in Japan today, defeating the Yomiuri Giants, 9-2 at the Tokyo Dome, as J.D. Drew hit his second home run in two days, a grand slam in the first inning.


Tim Wakefield pitched five solid innings, allowing two runs against Japan's most famous baseball club. But the biggest moment of the game was when hometown hero Hideki Okajima came in to pitch in the seventh (pictured). The former Giant reliever received a thunderous ovation in pitching a scoreless inning.

Jed Lowrie also added a solo homer, and Brandon Moss and Coco Crisp drove in runs to lead the Red Sox offense. Monday is an off day, and the Red Sox will play the Oakland A's on Tuesday night in Tokyo (early morning in the US) to open the 2008 MLB season.
I'll be witnessing it at Professor Thom's along with some other early birds on Tuesday.

And I hope you all have had a Happy Easter.
Posted by The Omnipotent Q at 2:02 PM

Drew is going to have a much better season, and I expect improvement from Manny and Papi too, so look out everybody else!
Ellsbury will add some offense from the CF spot, even if he doesn't take the job completely away from Coco.
Yook, Peds, and Lugo will probably hang in about the same, with Lowell being the only guy who may drop off some, but maybe not. I'd call him an x-factor.
I also think it will help to have Cash to PH for Tek in late game situations, as much as I adore Tek.
I'm soooooo ready!

Also - thanks for the clip from 2001. I can't see that too many times.
I posted a reply to that post, but it was days after the fact as I've been swamped by the start of Little League combined with the NCAA's (Go Heels!) so probably no one saw it. I practically worshipped Clark. I'm such a fan my wife called me on the job to tell me when she heard the news. He will be missed.

I also think Drew will have a bounceback year in 2008, Sosock. I believe it so much I took him on one of my fantasy teams...I think Lugo will have a better year too. It will be interesting to see where Lowell will be. I hope he gives the Sox similar numbers to 2007...Good luck to your Tar Heels next week!

Thanks for replying about the 2001 clip. I was really sorry to hear about Mr. Clarke's passing. He was a true visionary.

That was SOOOOOOO excellent when Hideki came in. Superb moment.