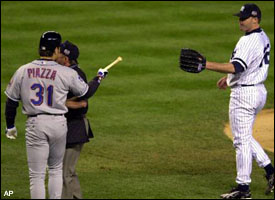 Ah, another one of those letters in the newspapers.

Today, it comes from the New York Post's Sound Off column, where most of the letters were about Shelley Duncan's dirty slide and bench-clearing dustup last week at Tampa. Everyone is entitled to their opinion, of course.
But this one jumped out at me, and for two reasons:

Joe Girardi was right to tell his players to fight back against Tampa Bay or any other team that tries to play rough, especially in spring training games. That's the way to play ball-payback, always. Mike Piazza gave it the "laidback" California-dreamin' approach to Roger Clemens' beaning and bat-throwing during the 2000 season, and the Mets lost the World Series in five games. If Piazza would have gone out and twisted Clemens' arm out of its socket, the Rocket might have watched the World Series from a hospital bed. If Girardi plays it rough, he may even get a few of us Mets fans cheering him on.
Michael J. Gorman
OK, Mr. Gorman, first off, Elliot Johnson's bowling over of Francisco Cervelli was a clean play. He's got every right to do what he did. A catcher with the baseball blocking the plate is subject to such a move, and the player has the right to take that action. The only thing in question is whether Johnson should have done such a thing in a spring training game. I believe yes, as Johnson's a rookie trying to make the Rays, trying to show his manager he knows how to play the game and belongs with the big club. (And besides, what is he supposed to do, just let Cervelli tag him out?)

This doesn't give the right for Duncan to do what is agreed is a dirty play, coming in on Akinori Iwamura with his spikes high. Duncan tried to make the world believe he was just trying to knock the ball out of his glove, but the video made that out to be a lie. "Payback"is not justified with every perceived slight, especially when players can really get hurt in an unnecessary play.

And, I've been hearing this crap for years about Mike Piazza and the thrown bat in the World Series. Let's just set the record straight here. You being a Mets fan should know that Piazza simply could not retaliate by "twisting Clemens' arm out of its socket" because if he started a bench clearing brawl, he would have been suspended for the rest of the World Series, and he was simply the most important part of the Mets offense.(Believe me, I would love to have seen Mike shove that bat up Clemens' ass. Piazza also would have loved to have done it, but he was smart enough to back off.) He would have been roundly criticized, and justly so, for getting himself thrown out of the World Series and destroying the Mets hope at a title. (When was the last time you saw a bench-clearing brawl in the World Series, Mr. Gorman? How about "never"?) And funny that Clemens is involved, as he got himself tossed out of Game 4 of the 1990 ALCS for running his mouth off at umpire Terry Cooney, thus his absence (he got tossed in the 2nd inning) killed any chance the Red Sox had of coming back in that series.

And as far as taking a "California dreamin'" approach to Clemens' beaning that previous July, Piazza was nearly knocked unconscious by that beaning, left the game, and did not face Clemens again until the postseason, when the broken bat toss by Clemens happened. (So he could not go after Clemens that July night.) You seem to imply that Piazza is some kind of "pussy" by not jamming his fist down Clemens' throat. In reality, the "pussy" here is Clemens. He knew Piazza couldn't retaliate in Game 2 of the World Series, and he could get away with that bullshit. The Texas Con Man had been getting away with that type of behavior for years, mostly because he was an AL pitcher who didn't have to come to bat.

Now, Clemens is getting his comeuppence for all the crap he pulled all those years, and his reputation is in ruins. And it didn't take Mike Piazza to do it to him.
But I bet somewhere, Mike must be enjoying it, too.

And finally that last line: If Girardi plays it rough, he may even get a few of us Mets fans cheering him on. Holy mackerel, what right-thinking Mets fan is going to root for the Yankees (and that style of play) but the most casual, fair-weather fan?
Posted by The Omnipotent Q at 3:44 PM

I will Root For The Yankees WHEN:

There's snow on the ground on 4th of July in Miami;

When Tim Mc Carver SHUTS UP about Derek Jeter;

When a Dodgers Game in Southern CA is snowed out in August;

Tomorrow will Be The St Patrick's Day Parade, when Yankees Fans get into it with Red Sox Fans, big time, if the '05 Parade's any barometer, as I donned a Sox Cap & heard "Boston Sucks" @ West 60th Street & 5th Avenue & I'll be with Queens County Ancient Order Of Hibernians.