Sox Win as They Make History in LA 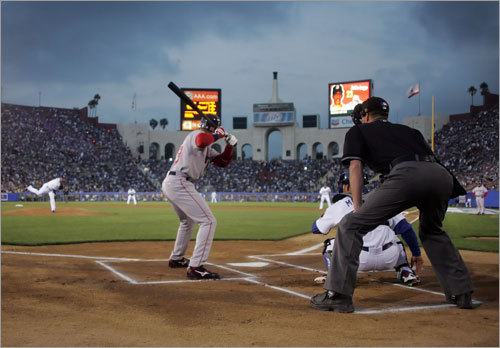 Last night's Red Sox-Dodgers game in the Los Angeles Coliseum may have been the single strangest baseball game I have ever seen.

A record crowd of 115,300 attended the game, in a benefit for ThinkCure, a Dodgers charity. It was an amazing 201 feet down the left line with a 60-foot screen to prevent pop flies from becoming home runs.

Tim Wakefield pitched well for the Red Sox, allowing just one run in five innings. And surprisingly, it was NOT home run derby last night, but it was obvious that some lefty hitters like David Ortiz were aiming for the short porch. The porch was so short that Joe Torre actually had Andruw Jones playing shortstop in a five-man infield at times.

The game was so strange that the camera angle was off, as the cameras had to be mounted in right centerfield, so you couldn't tell what pitches were truly strikes. And the cameramen had trouble with line drives, that they focused many times on the outfield when the ball ended up in the glove of the third baseman. They aren't to be faulted, as it was a truly bizarre night. (I didn't notice an overwhelmingly number of Red Sox fans there last night. I didn't hear the game last night, as I was in a crowded bar, so I didn't hear the reactions when the Red Sox scored.)

So bizarre that Kevin Cash, yes, the Sox weak-hitting catcher who now has the Mirabelli Position of catching Tim Wakefield, hit the first homer of the night, a good shot over the screen (I absolutely could not tell where it was on TV) to put the Sox up, 3-1. Kevin Youkilis added a home run over the screen as well to make it 5-1. (It was another high drive but I'm not sure it would have gone out of Fenway.) On a few occasions, balls hit the screen, but no one got more than a single out of it because of how close left field was.

The Red Sox went on to win, 7-4, as history was made in Los Angeles. The Sox and Dodgers will close out spring training today at Dodger Stadium before the Red Sox get down to the serious business of resuming the regular season in Oakland on Tuesday night.
Posted by The Omnipotent Q at 3:44 PM