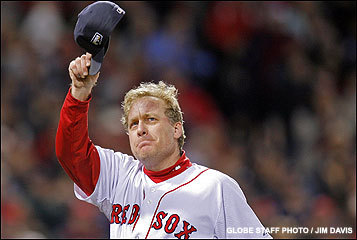 Curt Schilling pitched 5 1/3 innings of gritty baseball last night, in what very well could have been his last start in a Red Sox uniform. He allowed one run in the first, on a hit batter, a single and a groundout. After the shaky beginning, Schilling settled in and found his groove.

He allowed just one earned run, and left a 2-1 lead in the sixth after walking two batters in a row. Terry Francona wasted no time bringing in Hideki Okajima.

Oki was simply superb, pitching 2 1/3 perfect innings, striking out four. He is still unscored on in the postseason after having a really shaky September. The two-week "vacation" he took late in that month has certainly been the tonic he really needed.

The Red Sox got their two runs in the fourth and fifth, on a sacrifice fly by Jason Varitek and a double by Mike Lowell, but they were leaving runners everywhere last night and I was praying it wouldn't come back to haunt them (and it didn't). The highlight at Professor Thom's last night was Jacoby Ellsbury stealing second, the first stolen base of the series, and that means on October 30, everyone in America gets a free taco from Taco Bell. It set off loud cheering a chants of "Taco!" "Taco!" Thanks, Jacoby.

With two outs in the eighth, Jonathan Papelbon took over and gave up an infield single to Matt Holliday. Before the threw a pitch to Todd Helton, he promptly picked off Holliday, who for whatever reason, wandered way too far off the bag and was a dead duck. He may have had four of the five Rockies' hits, but he wears the goat horns for killing a possible late rally.

Pap retired Colorado 1-2-3 in the ninth to put the Red Sox just two wins away from their seventh World Series championship. The 2-1 win shows that the Sox can put up the runs as well as win the tight nailbiters. The Sox have now won five straight postseason games and six consecutive World Series games. (Colorado scoring in the top of the first meant it was the first time the Red Sox were behind in a World Series game since the end of Game 7 of the 1986 Fall Classic.)

Daisuke Matsuzaka gets the ball tomorrow night against Josh Fogg at Coors Field. Last night's win gives Curt Schilling his third win in this postseason, and his 11th of his career. He continues to improve his resume for the Hall of Fame, which looks like a real possibility now.

If last night was his last start in a Red Sox uniform, all I can say is: Thanks, Schill. Thanks for the memories, and a simply incredible October three years ago.
Posted by The Omnipotent Q at 12:04 PM

Did you see the "Dancing Papelbon" puppet in the stands? Hilarious.

Very funny stuff. I love how those legs move!!!

The ROX Fans, all 12 of them, have hit the wall, as well as the team

I think last nights win gets Schill closer but he probably still needs to win 30 more regular season games, or 1 more 15 win season and another 3-0 OCTOBER!!!!!