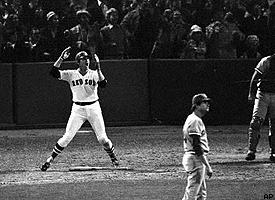 Tonight the Red Sox and Indians meet in Game 6 of the 2007 ALCS at Fenway Park. They have been involved in some of the more famous Game 6s in baseball history, and it got me to thinking about all the previous games they'd been involved in.

Courtesy of Baseball Reference, I found some surprising results. This will be their 11th Game 6 in team history, and they have a winning record in the previous 10, going 7-3. And a real surprise is that the Sox have never lost a Game 6 at home in Fenway Park, going 4-0.

Here is a breakdown of the ten previous Game 6s the Sox have played.

1903 World Series at PIT: In the first World Series, the Americans (before they were known as the Red Sox) were down 3-2 when they beat the Pittsburgh Pirates, 6-3, behind Bill Dinneen. They would win the next two games (it was a best of nine series) and the first World Series championship.
1912 World Series at NYG: The Red Sox were up 3-1 in the series (Game 2 ended in a tie), when the Giants won Game 6 in New York, 5-2, as they scored five runs in the first and never looked back. The series returned to Fenway where the Giants won Game 7, and forced a Game 8 that the Red Sox won in dramatic style, 3-2, in 10 innings.
1918 World Series vs. CHC: The Red Sox won Game 6 at Fenway over the Cubs, 2-1, behind Carl Mays. It was the only Game 6 that the Red Sox won a World Series on, and it was also won on September 11, as the regular season ended on Labor Day due to restrictions imposed by World War I.
1946 World Series at STL: The Red Sox were up 3-2 as the World Series returned to St. Louis, and the Cardinals won, 4-1, behind Harry Brecheen. It forced a Game 7, and Brecheen would come out of the pen in the eighth to get the win as Enos Slaughter did his "mad dash" from first on a single to score the Series-winning run.
1967 World Series vs. STL: The Impossible Dream Red Sox were down 3-1 in the Series against the Cardinals when they won Game 5 and forced it back to Fenway. The Red Sox exploded for four home runs, two by Rico Petrocelli, and won 8-4, and forced Game 7 the next day. But Bob Gibson was simply the best pitcher on the planet and beat Jim Lonborg on short rest as St. Louis won, 7-2.
1975 World Series vs. CIN: An epic game for the ages. Reds led 6-3 in the eighth as the Sox rallied for three when pinch-hitter Bernie Carbo hit a home run in the center field bleachers. It continued on to the eleventh when Carlton Fisk hit Pat Darcy's second pitch off the left field foul pole to force Game 7 the next day, which Cincinnati won. It has been called the greatest World Series game of all-time and put a slumping sport back on the map. Pudge's "waving" the ball fair is still one of the game's most enduring images.
1986 ALCS vs. CAL: The Red Sox were down 3-1 when they rallied from three down in the ninth, capped by Dave Henderson's dramatic home run, and they eventually won in extra innings. The Angels were completely demoralized, and the Red Sox bashed them back at Fenway in Game 6, 10-4, behind Oil Can Boyd. The Sox would win the pennant the next day, 8-1, as Jim Rice and Dwight Evans hit home runs. It would be Roger Clemens' only postseason win in a Red Sox uniform. This series was one of the greatest comebacks in postseason history, but it would be overshadowed by what happened next.
1986 World Series at NYM: This has been rehashed ten million times, so I'll spare you all the details.
2003 ALCS at NYY: The Red Sox were down 3-2 in the ALCS at Yankee Stadium with John Burkett pitching for the Sox. The Red Sox came from behind twice, and scored three runs in the seventh, and a two-run home run by Trot Nixon gave the Red Sox a 9-6 win and forced a Game 7 the next day. And you know the gory details of what happened that night.
2004 ALCS at NYY: One of the most legendary postseason series of all time. The Red Sox come from 0-3 down to win Game 4 and 5 on David Ortiz' heroics. Game 6 features Curt Schilling pitching with a bum right ankle and a sock that's blood stained from a pre-game surgical procedure. It also has Mark Bellhorn blasting a three-run homer and Alex Rodriguez gaining a new nickname: "Slappy." The 4-2 win forces a Game 7 the next day, as the Sox made history as the first team to get to Game 7 after losing the first three. And they humiliate New York on their own home turf, blasting them 10-3 and going to their first World Series in 18 years. They would win that in four straight and reward all their long-suffering fans with a World Series win that cap off one of the most historic postseason rides in history.

So the Red Sox Game 6 history certainly has been interesting. We'll see if tonight's game enters Red Sox lore as another memorable event. I wouldn't bet against it being one.
Posted by The Omnipotent Q at 12:26 PM

& Last Night was a "Bombos Away" Triumph, with Curt & JD Drew

Yes, last night's game was a great story, worthy of the annals. Shilling and Drew came up huge. Cleveland's choking.