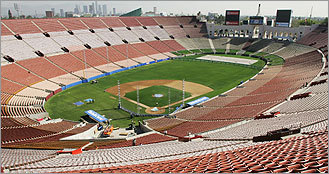 It's going to be an interesting game for the Red Sox against the Dodgers in Los Angeles tonight, as it will be played in the Los Angeles Coliseum, where the Dodgers played from 1958-61, and it marks the 50th anniversary of their move from Brooklyn.

Left field back in the old days of the Coliseum was just 250 feet, but because new seats were added many years ago, it will be just 201 feet down the left field line. (And it will be 440 feet to deep right.) There will be a 60-foot screen put up for the game in left, and balls off that screen will be in play. Pinball, anyone?

Well, batting practice should also be fascinating to watch for the fans tonight as well. I'd love to see if Manny Ramirez can hit one completely out of the Coliseum.

They are hoping to set a Guinness Book of World Records attendance record for the game, as 115,000 fans are expected to be in the house. 90,000 seats were sold, and another 25,000 standing room fans will be there. It has been said that a game played in Australia in the 1956 Olympics (I didn't know they played baseball in the Olympics back then) drew that many fans. But the MLB record was set in the very same ballpark during the 1959 World Series the Dodgers played with the White Sox, just over 93,000, so that record should easily fall.

I have to admit I'm really fascinated to see this game, and the huge crowd. I'll be at Professor Thom's to check it out. (It will be broadcast on NESN.) Of course, there is a little bit of regret seeing it played there for me. I wasn't alive back then, but this is the venue the Dodgers moved to when they abandoned Brooklyn in 1957. It will always be a sore spot for many people I know who were Brooklyn Dodgers fans. The hurt here over their move will never fully go away, no matter how many years have passed.

In Red Sox news, Mike Timlin was placed on the DL yesterday, with a lacerated finger. He injured it in a game on March 20, but will be eligible to come off the DL when the Sox reach Toronto on April 4. David Aardsma or Bryan Corey seem likely to be on the roster in Timlin's place for the second part of the Oakland series. Josh Beckett will also come off the DL and possibly start for the Red Sox that night against the Blue Jays.
Posted by The Omnipotent Q at 12:29 PM

THAT Hurt will Never Fully-Heal