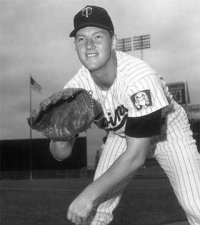 Today was supposed to be the final game behind the microphone for Jim Kaat, as he was retiring after a 23-year career as a broadcaster. (The game between the Red Sox and Yankees was rained out, so it is unclear if he will do any other games this weekend.) He went into the booth after a very good 25-year career as a pitcher. Kaat was a terrific announcer who I had a lot of respect for doing Yankees games on the YES Network.

While Michael Kay is generally reviled by Sox fans (and MANY Yankees fans) as a worthless shill, Kaat always did the games with a sense that the fans had some intelligence, and never talked down to them. He had no schtick, and no ego. I especially enjoyed his take on pitching, and I also liked his stories of his days as a pitcher with Minnesota, the Chicago White Sox, Philadelphia and St. Louis. He was always a calm presence in a broadcast booth that at times would go way overboard with nonsense.

I wish Jim Kaat all the best on his retirement from the booth. Yankee games were a little less unbearable with his presence on the YES Network.

Thanks for everything, Jim. You will definitely be missed.
Posted by The Omnipotent Q at 7:53 PM

JK behind the mike is as class an act as he was on the mound. He will be missed as he drives the country with his wife in a van.

His take on the lack of complete games, is in line with my thoughts:

Kaat was on FOX yesterday;

He will definitely, be missed by me.