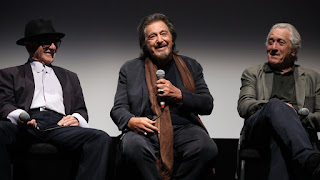 Trivia will be happening this Tuesday night, November 12th at 8:30 PM< with "November Trivia" as the Special category. It will be seven questions connected to the month of November in history and pop culture. The Q Train lightning round will be "DeNiro, Pacino and Pesci Trivia." In honor of the new film "The Irishman" that just opened earlier this month that stars Robert DeNiro, Al Pacino and Joe Pesci, I will give you the names of ten films that starred one of these iconic stars, and you have to tell me which one. (Each film will include just one star, none contain two or more.)

The Sneak Peek question for this week is:
"The South by Southwest Festival takes place each year in what city?"

I look forward to seeing many of you this Tuesday night for another great night of Trivia Q&A!
Posted by The Omnipotent Q at 9:20 AM