"The Presidents and the Pastime"

I recently finished reading a very exhaustive account of the relationship between the White House and Major League Baseball called "The President and the Pastime: The History of Baseball & the White House" (University of Nebraska Press) by Curt Smith, who was a long time White House speechwriter. 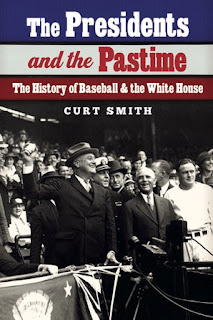 Smith begins with baseball's roots at Revolutionary War, and goes up to President Donald Trump's college baseball career. We find that Abraham Lincoln was a fan of "town ball", one of baseball's many ancestors. Beginning in the 20th century with Theodore Roosevelt (who was more of a football fan than a baseball fan), each US president gets a chapter in the book, with some fascinating facts about our Chief Executives and their connections to baseball.

Woodrow Wilson was a big baseball fan, and his chapter includes his steering the game through World War I, and ends with his suffering strokes near the end of his second term, and baseball became his refuge as his life was coming to an end. Franklin D. Roosevelt, who is on the book's cover, arguably saved the game while America entered World War II, and I was never aware of the campaign to get him enshrined into the Baseball Hall of Fame.

Richard Nixon was a devoted baseball fan who drew up his "Dream Teams" of MLB rosters from early and modern baseball. John F. Kennedy loved the Red Sox, and Ronald Reagan did recreations of baseball games as a young announcer back in the early 1930s. MLB was a passion not only of Jimmy Carter but also his mother Lillian, and George W. Bush's longtime love of the game, from his part-ownership of the Texas Rangers to throwing a perfect strike at the 2001 World Series, shortly after the 9/11 attacks.

The book is centered on the Washington teams, from the two Senators franchises to the current Nationals club. Smith also intersects baseball history with the history of the United States, and what all the presidents dealt with in their time in office. I found a few minor errors in the book, such as Smith wrote that President Bush threw his World Series first pitch to Jorge Posada of the Yankees, which was not true. (It was caught by backup Yankees catcher Todd Greene.)

"The President and the Pastime" is overall a very good book from a person with a interesting angle in Washington D.C. Smith also gives his thoughts on how the game can be improved, and I'm with him on most of them. It was overall an enjoyable read about when the highest office in the land and the country's sports passion meet.
Posted by The Omnipotent Q at 11:28 AM