How About "Tony Conigliaro Drive?" 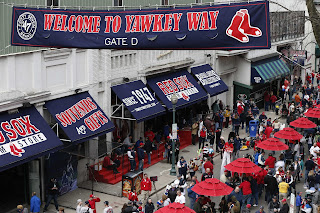 Earlier this week, Red Sox owner John Henry talked about wanting to change the name of the street that Fenway Park is named after, Yawkey Way. The block was originally called Jersey Street, but was renamed in honor of longtime Red Sox owner Tom Yawkey in 1977, some months after he passed away from leukemia.

Yawkey was a complicated man, look most men who've owned baseball teams down through the years have been. He was born in South Carolina, and wasn't known for having any progressive racial views. It was well-known the Red Sox dragged their feet on integrating the team once the color barrier was lifted in 1947. (The Red Sox signed their first black player in 1950, an outfielder named Piper Davis. He isn't well-known, as the Red Sox never promoted him to majors, and he never reached the big leagues with anyone else.)

Yawkey's been called a racist by many, and might well have been. (A friend of mine many years ago did some research trying to find a "smoking gun" on Yawkey, some solid evidence of his racism "on the record." He really couldn't find it.) Yawkey had many cronies around who were well-known to be bigots. It is also well-known the Red Sox gave Jackie Robinson a tryout in 1945 that was little more than just window dressing, had a chance to sign Willie Mays in 1949, and passed on both. And there isn't any doubt that the fact the Sox passed on many great black players in this era hurt the team going forward.

OK, Yawkey wasn't on board with racial progress in baseball.

But let's not forget other facts about him that seem to be lost on most fans.

In 1932, the Red Sox were at their historic nadir. They were the worst team in baseball, and had their all-time worst season, finishing 43-111, 64 games behind the champion Yankees. Fenway Park was falling apart, and the team did not draw 200,000 fans that season. The team was teetering on the verge of bankruptcy. There was no guarantee the Red Sox as a franchise was continue in Boston. They needed a savior. Enter Tom Yawkey.

Yawkey has just turned 30 years old and had just inherited millions of dollars from his uncle, who was his legal guardian. And he wanted to own a team. (He had actually been offered a 50% share in the Brooklyn Dodgers earlier, but declined it, as he wanted complete control of a team. Imagine how Dodgers history might be different had he accepted that.) He bought the Sox, imediately renovated Fenway Park, and set about making the Red Sox relevant again.

Yawkey's dream was a World Series title, but under his ownership of 43 years, the Sox won three AL titles, losing them all in seven games.

In 1953, the Braves moved out of Boston, leaving the city to the Red Sox, They also were the original supporters of the Jimmy Fund, helping children struck down by cancer. So the Red Sox filled that hole, and have done so ever since. Yawkey and his Yawkey Foundation have raised hundreds of millions for that worthy organization over six decades. There are many people still alive today who can thank the Yawkey Foundation for all their great work with the Jimmy Fund.

One thing I did notice many years ago was that once the Red Sox won the 2004 World Series, it seemed like it was "open season" on Tom Yawkey's legacy. I saw many writers blasting him, especially the Red Sox' dubious racial history. As owner, of course, the buck stops with him. I think the anger over the Red Sox not winning the Series all those years was laid at the feet of Yawkey, whether true or not.

I believe that the rush now to rename Yawkey Way is just a knee jerk reaction to all that's going on with the taking down of the Confederate statues. The Sox managements obviously fears that the attention will shift over to them and the Yawkey name. So they are trying to beat them to the punch, and are now pushing to change the street name. (It's not as easy as it may appear, as the city of Boston owns the street and has control over its name. It will take open hearings to affect the change. But I will bet it WILL happen.)

I have no strong feelings either way on changing the name of the street. If they want to do it, fine. Street names change all the time. Henry suggested renaming it after David Ortiz, but the street at the end of Yawkey Way was just named for him earlier this year ("David Ortiz Drive"), and the bridge near Fenway was also just named for him, and justifiably so.

I would hope they would rename the block after Tony Conigliaro, a beloved native son of Boston whose career was cut short with that terrible injury he suffered and its aftermath 50 years ago. Carl Yastzemski would also be a great choice, as would Pedro Martinez as well. I saw on another site that someone suggested calling it "Jimmy Fund Way," as they would keep Yawkey's legacy alive in the name. Any one of them would make sense to me. (BTW, some have suggested Ted Williams, but Lansdowne Street was named "Ted Williams Way" many years ago.)

So, like many people who have walked this earth, Tom Yawkey was a complicated man, with many faults. But he wasn't without his good points, and the Red Sox have honored him down through the years, including naming Fenway's street after him. I'm sure that there are many fans who don't want to see the name changed, but it won't change history if the block changes its name.
Posted by The Omnipotent Q at 11:38 AM