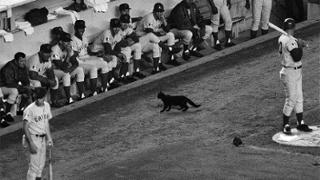 Many of you may or may not know that there was a time that the Chicago Cubs were a baseball dynasty, winning back-to-back World Series and four NL pennants in five years.

I can promise you that none of you reading this witnessed it live.

The years the Cubs did this was from 1906-1910. Now with the current Cubs on a rampage through the National League in 2016, award-winning journalist Hal Bock has released a book chronicling the early of one of MLB's most beloved teams in "The Last Chicago Cubs Dynasty: Before The Curse" (Rowman & Littlefield).

The book is centered on those great Cubs teams that ruled baseball just after the turn of the 20th century. It features such Cubs legends as Moredcai "Three Finger" Brown, Frank Chance, Joe Tinker, Johnny Evers (the last three being the infield immortalized in poetry as "Tinker-to-Evers-to Chance"), Ed Reulbach, Orval Overall (one of my favorite all-time baseball names) and Johnny Kling. (Mets fans of the early 1980s may remember that name well, as Mets catcher John Stearns broke his record for most steals by a catcher one year, and Kling's name has always stuck in my head because of it.)

Bock gives a comprehensive account of Chicago baseball of the 19th century, and how the Cubs reached the pinnacle of the club's success in the first decade of the 20th century. He also talks about the Cubs' two biggest rivals back then, the New York Giants and Pittsburgh Pirates, which featued such baseball immortals as John McGraw, Christy Mathewson and Honus Wagner.

The book also accounts for the Cubs slide into mediocrity after those dominant years, and picks up with their NL title teams of 1918, 1929, 1935, 1938 and 1945. Five pennants but no championships for the Cubs since that last World Series title of 1908.

"The Last Chicago Cubs Dynasty" also touches upon some of the Cubs legendary misfortunes that have befallen them over the years, such as the alleged "Billy Goat Curse" of 1945, the "Black Cat" incident at Shea Stadium in 1969, and of course, the Steve Bartman affair of 2003. (As a Red Sox fan, I can understand how painful a book like this is for Cubs fans to read.)

Bock also describes all the places the Cubs have called home (there were many before they moved into Wrigley Field in 1914), and a chapter on all those legendary players of Cubs history, like Ernie Banks, Ferguson Jenkins and Ron Santo. Actor Joe Mantegna, a lifelong Cubs fan, does an interesting foreword to the book.

"The Last Chicago Cubs Dynasty" is definitely a terrific read for that Cubs fan in your life. It will be mostly painful, but it brightly illuminates the time when the Cubs were a feared force in MLB. The Cubs may finally be shedding that "lovable losers" image they've had all these years with a dominating team they have in 2016. So, it maybe worth taking one more look back to see how the Cubs got to this point.
Posted by The Omnipotent Q at 4:00 PM