David Ortiz announced today that the 2016 season will be his last in an MLB uniform.

And he did it on his 40th birthday.

I won't go over his incredible resume he built up over the last 13 seasons in a Red Sox uniform. It speaks for itself. He is simply the greatest postseason performer in franchise history, as well as the greatest clutch hitter in Red Sox history.

In my mind, the 2013 postseason he had will cement his place in the Hall of Fame. He put the Sox on his back and had a World Series that was one of the greatest any hitter has ever had. Remember when he held that impromptu team meeting in the Red Sox dugout in the sixth inning of Game 4 of the 2013 World Series, with the Sox trailing 2-1 in the Series and 2-1 in the game? (Pictured below.) Jonny Gomes hit a three-run shot that inning that put the Sox ahead to stay, and they never trailed in winning the next two games and another championship. 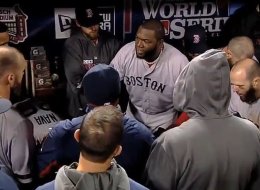 That is what a team leader does, and Papi has been an extraordinary one.

I don't expect him to get in on the first ballot, as there will be writers who will hold the fact he spent most of his career as a designated hitter. That should absolutely not preclude him from getting in. How many bad fielders are in the Hall but put up spectacular numbers? With rare exceptions like Brooks Robinson and Ozzie Smith, defense almost never enters into it when choosing the worthiness of a position player. It's about time these writers acknowledge that the DH has been part of the rules of the road in the AL for nearly half a century, and put the best ones like Papi and Edgar Martinez in. If relief pitchers can get in, why not DHs?

And then there will be those who will hold the alleged PED test he failed in 2003. Funny, how we still only know the names of three players from that list of 104 to this day, eh? Some writers will probably still hold that against him, but it shouldn't keep him out.

Papi is first eligible in January 2022. In my book, he's in. And his number 34 will be going up in right field at Fenway Park shortly after the 2016 season.

Here is the Large Father with some words about his coming retirement: