The dismantling of the Red Sox began in earnest on Monday, as Shane Victorino was traded to the LA Angels for utility infielder Josh Rutledge.

The Flyin' Hawaiian stamped his name into Red Sox legend with two enormous hits that will forever be remembered: the 2013 Game 6 ALCS home run that put the Red Sox ahead to stay against Detroit, and the triple that cleared the bases against St. Louis in Game 6 of the World Series.

Injuries have derailed the last two seasons for Victorino, and now he moves to a contender in Anaheim.

And Shane leaves the Red Sox with class: 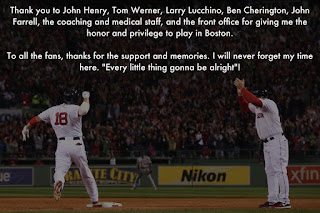 All the best Shane, and I'll never hear this song again without thinking of you: