Stick A Sock In It 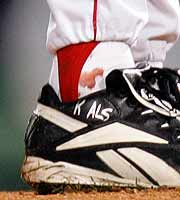 A controversy erupted last night over the sock Curt Schilling wore the two times there was blood on it during the 2004 postseason. Gary Thorne (who ironically grew up a Red Sox fan), told his audience as he was doing last night's game between the Red Sox and Orioles (he's a Baltimore broadcaster) that Doug Mirabelli told him:

"The blood on his stocking. It was painted. Doug Mirabelli confessed up to it after."

Mirabelli hit the roof when he heard Thorne's statement:

God, why are going down this road again? I remember Mike Francesa intimating the same crap right after the Red Sox won the World Series in 2004, but he sounded more like an angry Yankee fan and conspiracy theorist. It's a fact that what Schilling had done to him before those two games he had the bloody sock was a surgical procedure, and that there was leakage from the sutures. So, what did Schilling use to bring more attention to himself: paint as Thorne says, or ketchup?

Jeff Idleson, Vice-President of Communications for the Hall of Fame (where the second bloody sock resides), backs up Schilling, and says the stain on the sock is now brown, as what normally happens to dried up blood. Theo Epstein wasn't happy with Thorne either.

"I'm the GM of the team, not Jerry Springer. I couldn't give two [expletives] about what was on his sock, I care that we won the game. The rest, and Gary Thorne, is just noise."

What ridiculous nonsense this all is. The Red Sox want a retraction from Thorne, who in my mind has always been a bit of "screamer" when it comes to baseball. Unless he can prove Mirabelli said that to him (Doug vehemently denies it and Schilling believes him), he should keep his mouth shut and move on.

And, oh yes, the Red Sox won last night, 6-1, behind seven solid innings from Schilling and Alex Cora's first home run of the season (and the first "unaided" homer of his Red Sox career).

P.S. My thanks to the poster at Deadspin.com who linked my post on Doug Mirabelli's fictional day to the article about Curt Schilling today at the site. ("Dougie would never disparage Schilling. It doesn't fit into his schedule.") My Site Meter is going bananas again this morning, and I already have 200 hits on it. This could top the record for my site, set earlier this week. Stay tuned.
Posted by The Omnipotent Q at 11:26 AM

Thorne was trained as a Liar:

He is, after all, a Lawyer.

Cue the twilight zone music, because you know that this is not going to go away for one more day. After all, who do we play next, that is right the spankees. I am sure some scribe will try to get dougie or curt to blast the other.

Meanwhile bottom of ninth and its 5 - 2 Sox and the last score I saw have the spankees losing 5 - 0.