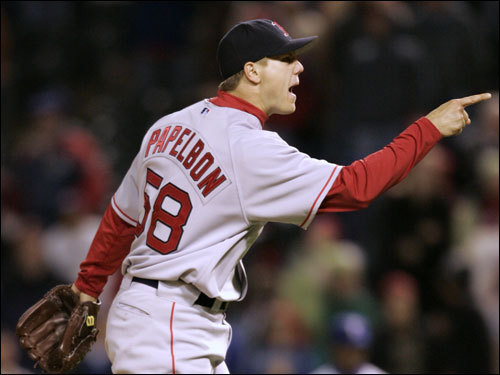 That is, keeping Jonathan Papelbon as the Red Sox closer. He saved the Red Sox bacon last night, coming into a 3-2 game in the eighth inning last night against the Texas Rangers with one out and a man on third and getting out of it, getting a pop up and a strike out. He looked very sharp in the ninth, striking out two hitters, including Brad Wilkerson looking. He threw just 15 pitches in getting his first five-out save ever, preserving the 3-2 win.

Curt Schilling rebounded nicely last night, after Opening Day's poor performance, pitching seven solid innings, allowing just a Frank Cattalonotto home run in the first. (I wish the Sox would have signed him in the off-season, as he always does something big against them.) Schilling struck out six, allowed just a walk and four hits in tossing 102 pitches, and getting his first win of 2007.

David Ortiz finally busted out, hitting two home runs to account for the entire Red Sox offense last night. (I missed both homers as I was stuck in a traffic jam on the Long Island Expressway, but heard it on the radio.) The offense continues to be rather moribund in the early going this season. It's just six games, and you know guys like Manny Ramirez and Mike Lowell will get it going soon. But the Red Sox have hit just three HRs so far, with Kevin Youkilis accounting for the other.

It seemed like Joel Pineiro single-handly was determined to put Texas in the lead in the eighth, walking two hitters and allowing a bunt single. Last night's showing is proving the Red Sox brass was right not to make this guy the closer, and to move Papelbon back to it. I'm not ready to give up on Pineiro just yet, but more lousy outings like Sunday night will make him this season's Rudy Seanez, a lousy free agent signing doomed to pitch in nothing but Garbage Time.
Posted by The Omnipotent Q at 11:20 AM

Looking better. Watch for Beckett to have a big game Tuesday.

I hope so David. He got off to a good start against KC, and he needs to keep it going...