"The Chicago Cubs: Story of a Curse" 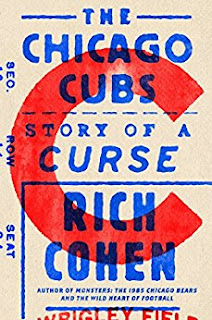 On November 2, 2016, history was made that night that no living person could ever say they had previously witnessed. The Chicago Cubs, billed for years as "The Lovable Losers", had finally reached the mountaintop and gave their long-suffering fans the thrill of winning their first World Series since 1908.For me, it brought back memories of watching the Red Sox win the World Series back in 2004, ending their own 86-year dry spell. I was pulling for the Cubs, and was thrilled for them and their supporters.

In the aftermath of the Red Sox win 13 years ago, there were a whole slew of books released about it from every conceivable angle you can think of. And with the Cubs' victory, it brought lots of reading material to hit the store shelves. And one of them was just released last month, by author Rich Cohen called "The Chicago Cubs: Story of a Curse" (Farrar, Straus and Giroux).

Cohen, who grew up in suburban Chicago and authored such books as "Monsters" (about the 1985 Chicago Bears) and "Tough Jews" (about the Brooklyn Jewish mob of the 1930s), takes us on a tour of his Cubs fandom, as well as a history of the star-crossed franchise he fell in love with. At the age of 8, he was warned by his father NOT to become a Cubs fan after taking young Rich to his first game at Wrigley Field. But a lifelong love of the team was born for him.

Cohen starts with those Cubs teams that dominated the National League in the latter part of the first decade of the 20th century, that featured such stars as Frank Chance, Joe Tinker, Johnny Evers and Mordecai "Three Finger" Brown. (And he goes into detail about how Brown got the nickname). The Cubs would would rule the NL from 1906-1913, winning two World Series and winning more games than any other club in the league.

The good times of dominance didn't last, as the Cubs won sporadic pennants over the next 30 years, but no World Series. And Cohen hits the "Curse" section of the book by retelling the story of tavern owner William Sianis and the story of his goat, which he brought to Game 4 of the 1945 World Series, but was ejected as the goat got many complaints from neighboring fans. Sianis then supposedly put the whammy on the franchise, whether you put any stock in curses or not (I don't), it makes for an entertaining retelling.

1969 is the next stop on the Cubs storied history of futility, blowing a long lead to the Mets that summer, then over to 1984 when the Cubs made it to the postseason for the first time since 1945, only to blow a 2-0 NLCS lead to the San Diego Padres, topped off by Leon Durham's memorable Game 5 error, and then to 2003 and the Steve Bartman Affair.  Cohen goes into plenty of detail about all of them to make every Cubs fan who remembers living through them shake their head in utter disgust. (He also goes into plenty of background on Bill Buckner, as remembers him from his Cubs days, as he has a photo taken with him in 1979.)

Cohen is clearly a devoted fan who has stuck with his team through thick and thin, and brings readers to his days at Wrigley Field as a youngster, cutting out of school to catch games in the bleachers with other diehards, especially during the days the Cubs were fighting to stay out of the NL East basement.

The book concludes with the 2016 championship season, and breaks down each postseason game. I did find the ending a bit surprising, as he was present in Cleveland for the Game 7 win, but didn't celebrate with other Cubs fans. He recalls being sad, like his childhood had disappeared once Anthony Rizzo caught the last out.

I definitely enjoyed "The Chicago Cubs: Story of a Curse." part of it might be the connection that Red Sox fans have with Cubs fans, with all the futility stretched out over the generations. But it is a great baseball story from a man who finally saw it  all come together for his beloved team.
Posted by The Omnipotent Q at 9:43 PM