Remembering An Icon On Tuesday 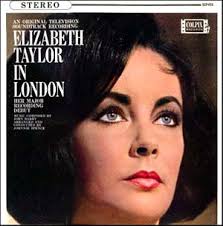 The Special Category for this Tuesday night's Trivia will be "Elizabeth Taylor Trivia." In honor of the passing of the iconic actress last Wednesday (we ironically had her in a question last Tuesday) we will have seven questions on her life. We've done this before with the recent passing of legends, such as Paul Newman and Michael Jackson.

BTW, I never knew Elizabeth Taylor recorded an album. (Actually, it is a score composed by the recently-deceased John Barry based on TV special the actress did in 1963.)

The Q Train lightning round is back with "True or False Trivia."

The Sneak Peek question for this week is:
"The Land of 10,000 Lakes is what US state's nickname?"

We get going right after 9 PM, and we've had some big crowds the last few weeks, so getting to Professor Thom's early might be a good idea. Hope to see many of you on Tuesday night.
Posted by The Omnipotent Q at 11:26 AM