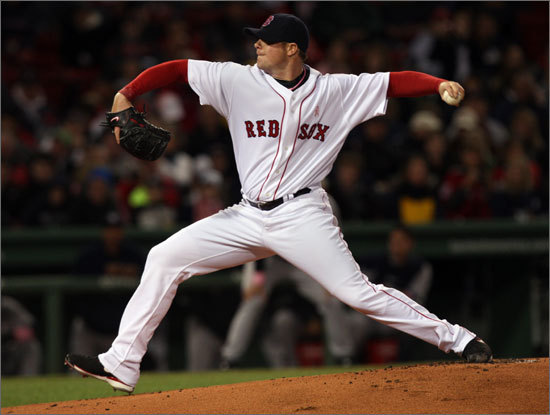 The Red Sox avoided a crushing sweep on Sunday night, as Jon Lester mowed down New York over seven innings, allowing just two runs on four hits as the Red Sox got back to .500, 9-3.

A.J. Burnett was worse than Josh Beckett was on Friday night, allowing nine earned runs over five innings. (Didn't the Yankees sign him to beat the Red Sox? He still hasn't in a New York uniform.) The Red Sox got it going early, as they scored a run in the second on Marcus Thames' butchering of a fly ball to left that scored a run. The Sox scored five runs in the third, all on hits by David Ortiz, Adrian Beltre and Jeremy Hermida.

Hermida capped the scoring in the fifth with a two-run blast to right.

The ten-game homestand ends this week with three with Toronto, who have been playing well as of late. Before the homestand began, I figured the Sox needed to go at least 7-3 on it. They are now 5-2 and taking 2 of the 3 from the Jays will accomplish that. John Lackey returns to the mound tonight.
Posted by The Omnipotent Q at 11:29 AM