On The Second Pitch... 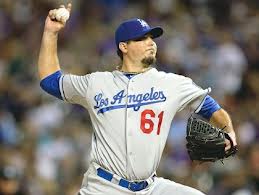 Josh Beckett made his Los Angeles Dodgers debut last night against the Colorado Rockies at Coors Field. In an interesting coincidence, it was a matchup of the two pitchers who opened the 2007 World Series at Fenway Park: Beckett vs. Jeff Francis.

That night, it was no contest, as the Sox routed Francis and the Rockies, 13-2. Beckett was simply sensational that postseason in leading the Sox to their second World Series title in four years.

But last night, we saw the Beckett that has driven Sox fans nuts in recent years. On the second pitch to leadoff hitter Tyler Colvin, Beckett served up a home run, and the Rockies were on their way. Yet another first-inning run given up to put his team in a hole.

All I can say is: thank you Magic Johnson for taking Beckett off the Red Sox hands. Not just getting him out of the clubhouse, but because he just isn't a very good pitcher anymore.

Earlier in the day, the Red Sox concluded an awful month of August at home (5-10 this month) with a 5-1 win over Kansas City, taking 3 of 4. Daisuke Matsuzaka was terrific, going seven strong innings, allowing just an unearned run in the first inning. He challenged hitters all day, something I wished he could have done his entire Sox career.

Dice-K's playing for a new contract with somebody for next year, and if he pitches like this in September, a one-year deal with somebody should be awaiting him. It just won't be in Boston.
Posted by The Omnipotent Q at 11:46 AM