Omar Minaya is a Big Fat Idiot (& a Clueless Putz) 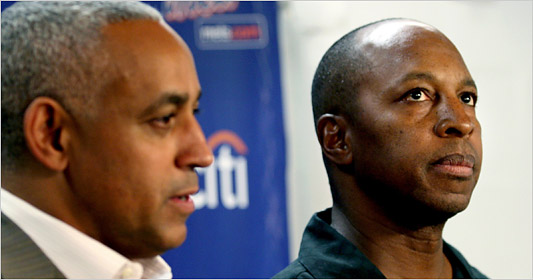 The wrong man got fired on Tuesday morning.

By now the world knows that Willie Randolph was fired as Mets' manager in one of the most appalling ways ever known. He got bounced after a Mets' win in Anaheim, and after winning 3 of their last 4 games. He got fired after beginning a trip out west by a general manager who was too afraid to do the dirty work in New York.

As far as I'm concerned Omar Minaya, errand boy for the Wilpons, was the one who should have been bounced on Tuesday. He put together this underachieving, appalling mess that is the current state of the New York Mets. I watched the press conference from Anaheim this afternoon and he comes across to me as not just totally clueless, but a liar and a backstabber as well. It was clear that Randolph wasn't going to survive the season unless the Mets got hot and back in the race. Minaya, with his absolutely absymal timing, has succeeded in turning Randolph into a sympathetic figure.

He tries to make it sound like he was Willie Randolph's "buddy," when in fact nothing could be more opposite. Randolph was forced upon him back in 2005 by the Mets' owners. Just this past Friday he gave Randolph a vote of confidence (not the strongest one in the world, but one nonetheless). So the Mets take 2 of the 3 from Texas and win in Anaheim, and just after midnight in California last night he decides THAT is the right time to cut Willie loose.

Minaya has not only run this franchise into the ground, but he has made it a laughingstock. I had the radio on this morning and one of the hosts, who was a Mets fan, summed it up perfectly for all Mets fans by this simple statement: "I am embarrassed to be a Mets fan this morning."

So why in the hell would Minaya wait until the opening of a West Coast trip to fire Randolph? He didn't want to fire him on Father's Day? He'd rather do it out west so he wouldn't get the wrath of the Mets fans if he did it while they were home? Minaya in the press conference says the decision was his alone, and not the owners. He let Randolph twist in the wind for weeks (or as he said in the press conference that he never said Randolph would be there the whole year) while the speculation was running rampant and Willie was asked about it for nearly a month by the press. Minaya seems to have his head in the sand on that, almost like he was oblivious to all the press speculation.

This season is now beyond saving for the Mets. This team now needs a serious overall, as they have gotten too old in places, thanks to Minaya and his stupidity. He's handled this whole situation with absolutely no class, and has done nothing but embarrass this once-proud franchise. (And it brings back bad memories of the M. Donald Grant days of 1977 when he ran Tom Seaver out of town. It's THAT bad.)

Yep, the wrong man got fired on Tuesday. Minaya's lying ass should have been the one out the door.
Posted by The Omnipotent Q at 6:47 PM

This is like putting a band aid on a sucking chest wound. The Mets traded Scott Kazmir for a broken down Zambrano back in 2004.

Then proceeded to signed Pedro to a 4 year deal and Delagado was traded for. Both deals are now dead weight. Both players are done-or were finished last year.

the Mets have traded away most, if not all, of their prospects for older players. Lastings Milledge and Carlos Gomez are better than Ryan Church and Moises Alou.

This team has no rudder and reacts with hysteria. Are Mike or The Mad Dog the GM? Omar sure acts like it.

More than once in the last five years a team exec has been left dangling in the breeze; an execution coming in anticlimactic fashion. Steve Phillips, Art Howe, now a classy man in Willie Randolph.

It's an act. The rumor of termination for deeds real or slights imagined. A fear of being left behind., a call for someone's head. Then the end in usually the most embarrassing way possible.

Willie may or may not be a good manager, but he is a classy man who was stripped naked of his dignity.

Blow up Shea soon and take Omar and The Wilpons with that dump.

They can't even make up a half decent excuse....

Signing Pedro was actually a good thing, as it put fannies in the seats and put some excitement back into Shea, so he was worth it. They had to sacrifice Gomez to get Santana, so you can't blame the Mets for that.

But I agree with everything else you wrote, Steel. It's going to be a long way back for the Mets, especially if they don't bounce Minaya.

Moises Alou, at age 43, is a proven winner?
I'm waiting for Minaya to announce that Steve Carlton has been signed:
Mets Owner toadies have been leaking their bleep to the NY Post for weeks;
Minaya looked like he could almost s--t in the press conference;
It is like 1977 all over again;
Last year's destruction did NOT surprise me in the least;
But having to sing the 7th Inning Stretch, at Professor Thom's last September, in regards to Mets Fans watching the team's demise, had me in tears, while watching wee ones sobbing, because of UTTER FO STUPIDITY;
And the panic of of one of The Mets Limited Partners in the papers;
I knew that the club was in trouble, when Chad Bradford and Darren Oliver were not re-signed, as they were replaced with the likes of Aaron Sele, Scott Schowenweiss, adding Joe Smith who suffered a Tired Arm and rushing Mike Pelfry into the Bigs, added to this disaster;
& Budweiser at $8? It was nauseating.

AND Minaya aide, Tony Bernazard, a 2nd rate 2nd baseman with the Montreal Expos, can, in the words of Fitzy, "GFY":

It's not meaning "Good For You";

Will you now beg indifference to "The Mutts" as they rebuild Grant's Tomb"?

I dub Mr. Minaya "OmarStein" I pray that Hank hires that guy. They deserve each other.

I'll still follow the Mets, but Minaya's got to go.

I wonder how long it will take until we see "Fire Omar" signs?

Minaya has always been an idiot

Bartolo Colon traded to Les Expos for Lee Stevens (meh) Brandon Phillips, Cliff Lee and Grady Sizemore. Colon was traded to The Whit Sox before the next season for luminaries like Rocky Biddle, Jeff Leifer and El Duque.

The Expos drafted Jason Bay and Omar flipped him to The Mets in 2002 for the immortal Lou Collier.

Omar went scorched earth on The Expos as he made them onto a feeder team for MLB.

as a fan of The Nats I hate Minaya. What they could do with Sizemore and Lee! Granted Phillips was flipped to Cincy where he broke out but still....

and the Nats are stuck with the clown car that is Jim Bowden.

His resume', as GM of Les Expos, was to conduct "Fire Sales" for MLB:

I think that's really what The Coupons, I meant Wilpons, especially Jeffy, wanted in him,which explains '07 in a nutshell;

Mike Jacobs went for what proved to be a Broken Down Delgado, with elbow and wrist surgeries and a broken wrist in Game 162;

& bringing in a spy in Bernazard, who turned the Mets Clubhouse into an unhappy bunch, in '07, and who proved to be a rat-spy for Jeffy Wilpon, who despised Willie Randolph and his agent for getting better money in a contract extension.