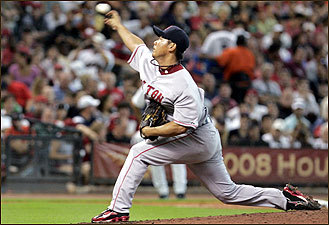 Six days after he took the worst beating of his Red Sox career, Daisuke Matsuzaka bounced back nicely in his first start ever against the Houston Astros. He struck out the side in the first, and you knew it was going to be a long night for the Astros.

He went only 1+ innings against St. Louis last Saturday, and allowed seven runs. But last night, he went five shutout innings, walked three while striking out four. Dice-K improved his record to 9-1 with the win. All he needed in offensive support was provided by J.D. Drew.

Drew was 0-for-14 before he blasted a three-run home run off losing pitcher Runelvys Hernandez in the third inning. It was Drew's 15th home run of the season. He now has as many home runs in June (11) as he had in all of 2007. He also has an MLB-leading 26 RBI for June.

The bullpen took over and shut Houston down the rest of the way. Craig Hansen and Manny Delcarmen were sharp, but Hideki Okajima continues to struggle, as he allowed a long pinch-hit home run to Reggie Abercrombie.

Jonathan Papelbon came on to get the last four outs to get his 24th save of the season to cap the 6-1 Red Sox win.

For me, today I am off to Shea Stadium for the Mets-Yankees game, the first time I have seen the two teams play since the 1974 Mayor's Trophy Game.
Posted by The Omnipotent Q at 11:49 AM