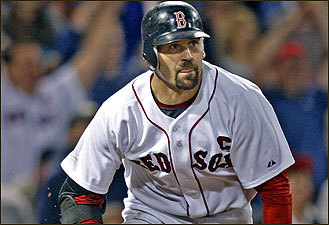 Going into the eighth inning last night, it looked like the Red Sox were on their way to their second straight defeat against the Arizona Diamondbacks. The bats once again looked pretty sluggish all night. Doug Davis, who had thyroid surgery earlier this year, pitched seven strong innings, allowing just one run, a home run in the first to Dustin Pedroia.

But the Sox showed some of that late inning magic that seemed to have disappeared lately. Pedroia singled one run to chase Davis, and Mike Lowell doubled in two runs off Chad Qualls to tie the score at 4, and then Jason Varitek (pictured), who was mired in a horrific 1-for-31 slump, singled to right to give the Red Sox the lead, 5-4.

Jonathan Papelbon sealed the deal in the ninth for his 22nd save of the season to put the Red Sox back in the win column. Chris Smith got his first win in the major leagues, as Justin Masterson had a tough night, and allowed all four Arizona runs, including a three-run homer by Chad Tracy.

You didn't think they were going to lose on Jerry Remy Day, now did you?
Posted by The Omnipotent Q at 12:00 PM

The Red Sox called today. I WON! I'M A CAPTAIN OF RED SOX KID NATION!
Thank you so much for voting for me! This is the BEST minute of my life
http://boston.redsox.mlb.com/bos/fan_forum/kn_captain.jsp

And did you see me on TV last night? I was invited to the game because I'm one of the finalists. I got to ride around the field in a truck and got to yell play ball from the field with other kids. It was awesome. This is the video
http://www.nesn.com/content/shows/roushfenwayracing.aspx?articleID=1422

Congratulations Victoria! I'm so happy for you, and glad I was able to help get the vote out. I didn't see the pregame on Wednesday so I missed you, but I'll check out the video. I'll put up a post about your win on Friday.