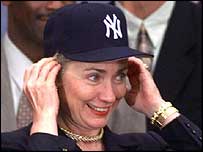 Hillary Clinton (pictured wearing the hat of her "favorite" MLB team) is expected to announce on Saturday that she is giving up her Democratic presidential ambition and will support expected nominee Barack Obama. (Not a surprise she is waiting until Saturday, as today is the 40th anniversary of the assassination of Robert F. Kennedy.)

I would bet that she will NOT be Obama's choice to be his vice presidential running mate, as the Obamas don't want the baggage that comes with her (aka Bill), and she doesn't want to be vice president anyway. (Obama needs a running mate who appeals to the two most important groups he still needs to win over from John McCain: Independents and Conservative Democrats. That's not Hillary.) I would bet in the long run she's hoping that Obama loses in November so she could run again in 2012.

But I digress. With Hillary Clinton not becoming president next year, she joins the O.J. Simpson prosecution team (remember Marcia Clark and Chris Darden?) and the 2004 New York Yankees (how can any of us forget them?) as famous (or is that infamous?) flops, or "it's theirs to lose," as they all found a way to do it. (Clinton was the overwhelming favorite to be the Democratic nominee just last winter.)

Speaking of Hillary and the Yankees, has anyone else noticed that the Yankees haven't won a World Series since New York state elected her a US senator in November 2000?
Posted by The Omnipotent Q at 11:17 AM

"she doesn't want to be vice president anyway"

You could not be MORE wrong there. She and Bill have said on numerous occasions that she VERY MUCH wants the position. In fact, that's why she has stayed in the race, to pressure Obama to meet that very demand.

It's OBAMA who does not want the Clintons at his back if he wins. For good reason: From behind, they could get a knife in his back and take what they REALLY want.

Sorry, you're just so completely wrong, it's kind of surprising.

If Hillary were to become vice president, she'd be trying to undermine Obama at every turn, and he knows it. I don't think he'll make a "deal with the devil" just to get elected. Not to mention getting the 800-pound gorilla that comes with her: Bill. I also read yesterday that two of three people he has on his vice president search committee are anti-Hillary.

I still think she'd rather see Obama lose in November and take another shot at running in 2012 rather than become vice president. Still my feeling, even if she has said she'd take the offer. I would bet she said it with the idea that Obama would never pick her to be VP, to make her look good should Obama fail with someone else on the ticket.

In the immortal words of Dennis Miller: "Just my opinion, I could be wrong."