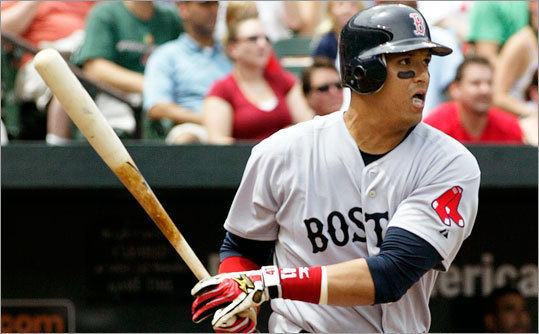 The offensive explosion that I'd been waiting for finally happened with the Red Sox on Sunday, as they pounded the Baltimore Orioles for 18 runs on 23 hits (both season highs) in getting a sweep at Camden Yards, 18-10.

Victor Martinez had five hits and is absolutely scalding the ball right now. He a double and 4 RBI to cap off a memorable first weekend in a Red Sox uniform.

The Sox jumped out 4-0 after the top of the first against Jason Berken, and it was 7-0 by the third. But memories of last July 1st came roaring back when Baltimore got six runs back off Clay Buchholz in the bottom of the inning.

But the Red Sox answered those six runs back with seven of their own in the top of the fourth to make it 14-6. The game was nearly two hours old by then, and it looked like it might take the rest of the day and night to finish.

Dustin Pedroia, Kevin Youkilis and Mike Lowell each had three hits, and Pedroia ,Youk and J.D. Drew each had three RBI. (Drew left the game after his RBI double sue to a groin strain he's recently been battling.) There were two home runs in the game, and both solo shots by Rocco Baldelli and rookie Josh Reddick.

Despite the offensive blowout, it was troubling to see Clay Buchholz struggle again. He couldn't make it out of the fifth, as he allowed seven runs and was pulled with the score 14-7. Manny Delcarmen came on and pitched 1 2/3 innings for his fourth win.

New York salvaged their four-game series in Chicago yesterday, so the Sox continue to be 1/2 game back in the AL East. The Red Sox are off today, and face the Tampa Bay Rays in St. Pete for a two-game series beginning tomorrow night.

Word is that Tim Wakefield may not be back as soon as everyone thought, as he has a problem with sciatic nerve, in his left calf. It's affecting his hamstring, and there's no timetable yet on when he might be back in the rotation.
Posted by The Omnipotent Q at 11:17 AM