Fighting Cancer, One Beer at a Time 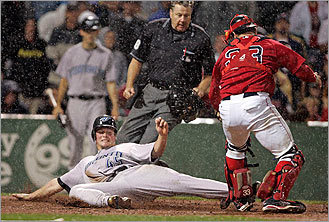 I missed Professor Thom's Jimmy Fund benefit on Thursday night due to my film commitment (boy does that sound high brow!) but fortunately there was another on Friday night, and many good folks turned out to raise money and drink beer for all those brave kids fighting cancer.

And Yours Truly won three draws in getting free beer, and I guess that explains why my head hurts this morning. But it was a nice night all around, especially during the Red Sox game when in the bottom crawl across the screen they mentioned Professor Thom's benefit with a few of my friends names. Nice job, Red Sox.

And the Red Sox did an even better job on the field last night, despite Josh Beckett's redux of 2006. He again gave up the long ball, giving up a three-run shot to Aaron Hill and a two-run bomb to Rod Barajas. That now marks 12 home runs in the last four starts for Commander Kick Ass. Something just isn't right with him, and I really hope he's not going the same route as late last year, as he tried to tough out an injury he hid. The Sox need him badly if they want to get to the postseason. Beckett went five innings last night, allowed all five runs, struck out nine and walked five.

But fortunately the Red Sox backed up Beckett on a rainy night, and after being behind 3-0, tied the score in the third. When Beckett gave up Barajas' home run, the Sox immediately answered back with Jason Bay's 29th home run, a two-run shot off Scott Richmond.

It was still knotted in the eighth when Toronto threatened. Travis Snider attempted to score on a double, but Jason Varitek (pictured) made the play of the night, taking the relay at home and totally blocked off the plate with his left leg and tagged Snider out to keep the score tied. The Red Sox took the lead for the first time in the night on Casey Kotchman's line drive force out with the bases loaded.

There was still more drama in the ninth, as Jonathan Papelbon loaded the bases with one out on two cheap hits and a hit batsman. But he reeled back and struck out the last two batters to preserve the 6-5 win and register his 31st save.

New York's win kept the Red Sox 6 back in the East, but Texas' loss in Minnesota (boy Joe Nathan looked determined to give that one away) moved the Red Sox back to 2 1/2 up in the Wild Card race.
Posted by The Omnipotent Q at 11:34 AM