Home Is Where The Wins Are 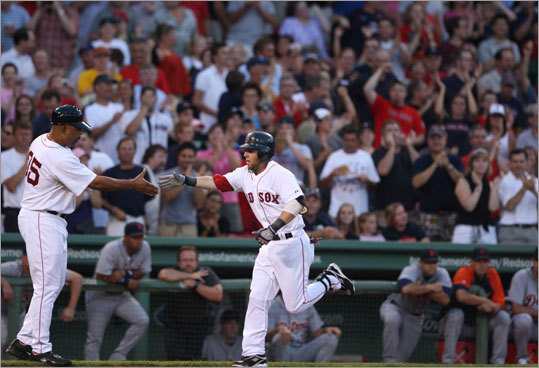 The hideous six-game losing streak is over.

And the season isn't over, no matter what the New York media says.

The Red Sox scored two runs from the first two hitters against the Tigers and Edwin Jackson last night, matching what they did in the previous 33 innings. Dustin Pedroia (two-run shot in the first), Jason Bay and Nick Green all hit home runs, and Brad Penny went his usual six innings.

I checked for updates during the Steely Dan show last night (see my next post), as I didn't see the game. The Sox had a 5-3 lead into the seventh, but Manny Delcarmen allowed two runs and it was tied. Green's sac fly in the bottom of the inning gave the Red Sox the lead back.

But Ramon Ramirez, who has been an adventure lately, put two on with two out and Terry Francona brought in Jonathan Papelbon, and he got the final out on a foul out. Pap got Detroit 1-2-3 in the ninth (he threw a total of 11 pitches), to put the Red Sox back in the win column.

Junichi Tazawa gets his first MLB start tonight at Fenway against the Tigers in Game 2 of the four game set.
Posted by The Omnipotent Q at 10:40 AM