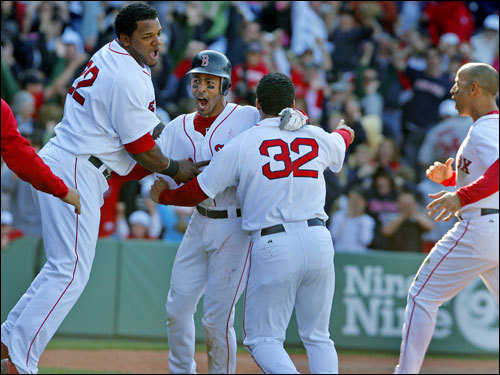 The Red Sox pulled off a simply miraculous win at Fenway on Mother's Day today, when the Baltimore Orioles bullpen imploded in the ninth after starter Jeremy Guthrie pitched 8 1/3 innings of terrific baseball.

The Sox were down 5-0 and seemingly done for the afternoon. Coco Crisp hit a popup on the infield that catcher Ramon Hernandez dropped for an error. Then Baltimore manager Sam Perlozzo inexplicably took out Guthrie, who only threw 85 pitches, for Danys Baez. Guthrie had the Sox' number all day, allowing only 3 hits. He certainly didn't look tired. I thought Perlozzo did the Sox a favor, and they sure paid him back for it.

David Ortiz doubled, scoring Crisp, and Wily Mo Pena singled, and then closer Chris Ray came in. He walked J.D. Drew and Kevin Youkilis to force in a run, and Jason Varitek doubled in two to make it 5-4. Eric Hinske was intentionally walked. Alex Cora then hit a grounder to Brian Roberts, who threw home for the force, but the replay looked like Youkilis was safe.

But on a 3-2 pitch, Julio Lugo grounded to Kevin Millar deep in the hole at first, and threw perfectly to Ray covering, but the pitcher dropped the ball, and two runs scored, giving the Red Sox a thrilling, come-from-behind win, and a series win over the tough Orioles. I was with my family watching the comeback, and they thought I was nuts when I was rather wildly celebrating the win.

I guess since they ain't Sox fans, they didn't understand!!

Josh Beckett did not get his 8th straight win, and looked shaky in this outing. He left after four innings, allowing two runs. He suffered an avulsion on his right middle finger, as some skin tore away from it on a pitch to Kevin Millar in the fourth. The Red Sox said after the game that it was NOT a blister, and that he may make his next start, which is Friday night at Fenway Park against Atlanta. I certainly hope he is able to make it, as that will be my first game at Fenway this season.
Posted by The Omnipotent Q at 7:52 PM

Had the In-laws over, since they are Yankee fans it was sweet to win like that then watch a the M's take care of the Yankees. A very good sports day.

Yes indeed. I had three of my brothers-in-law over, and they are all Yankee fans. Enjoyed the day immensely...

The Game was truly a "Gift";

As an O's fan he was just apoplectic-already in the "I can't watch them, I am over baseball" I reminded him as soon as Brian Roberts does anything at all, the guy will be back on board.

It's about right that happened. Peter Angelos has run The O's into oblivion. George on The Chesapeake.
From both sides, it was "How the F*** did that happen??"

I've known plenty of Red Sox fans who were like that over the years too, but NOT ONE ever truly walked away...

Chinatown to Chinatown, here I go.