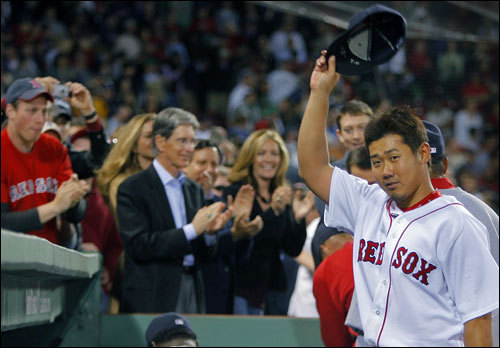 Daisuke Matsuzaka pitched an absolute gem of a game last night against the hard-hitting Detroit Tigers at Fenway last night, 7-1. It was his first complete game of his Red Sox career, and he allowed just one run on six hits while striking out five.

But the number that jumped out at me was: 0 walks. He was in total command all night, allowing just a home run by Curtis Granderson in the third inning. He wasn't nibbling, trying to hit corners. The Tigers are a free-swinging team, and he exploited that well.

It was a nice bounce back from his last Fenway start, when he allowed five runs in the first inning against Seattle, and he walked the first three hitters he faced that night. Dice-K got 16 ground outs, another great sign of his maturity. He is now 5-2.

The Red Sox expanded their lead to 8 1/2 games, their longest lead since September 1995, the last time they won the American League East.
Posted by The Omnipotent Q at 12:42 PM