Third Time's The Charm For Papi 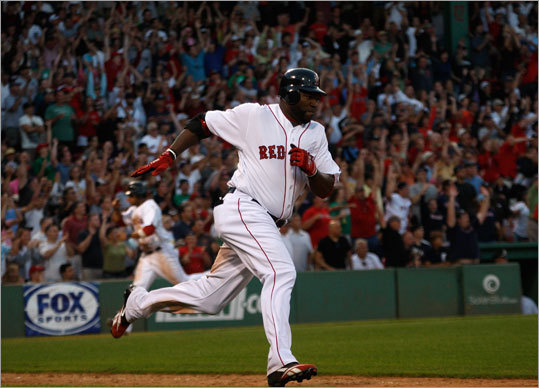 Saturday had all the makings of another disappointing day at Fenway Park.

Daisuke Matsuzaka was not sharp early, giving up four runs in the first four innings. The Red Sox were hitting into double plays and leaving men everywhere, yet again.

David Ortiz struck out with two on in the sixth, and the with the bases loaded in the seventh. His strike outs have been noticeably piling over the last week.

So, with the score 4-2 in the ninth and one out and two on, Detroit manager Jim Leyland decided he'd rather face David Ortiz with the bases loaded than Kevin Youkilis with runners at second and third.

Youk was intentionally walked, and Papi came up with runners in scoring position for the third straight at-bat. This time he didn't disappoint.

He lined a Phil Coke pitch into the gap in left and it rolled to the wall, and it allowed all three runs to score and it gave the Red Sox a thrilling 5-4 comeback win, one desperately needed, with New York later beating Tampa Bay. The win keeps the Sox 7 1/2 back in the East, and 5 1/2 behind the Rays for the Wild Card.

The bullpen did a nice job after Dice-K left after six innings, keeping the Tigers scoreless. Dustin Richardson, Scott Atchison and Hideki Okajima looked good, with Oki getting his 4th win of the year. Much-heralded rookie Ryan Kalish had two hits and an RBI, including a single in his first at-bat.

Clay Buchholz pitches in the finale today against the Tigers' Justin Verlander.
Posted by The Omnipotent Q at 11:45 AM