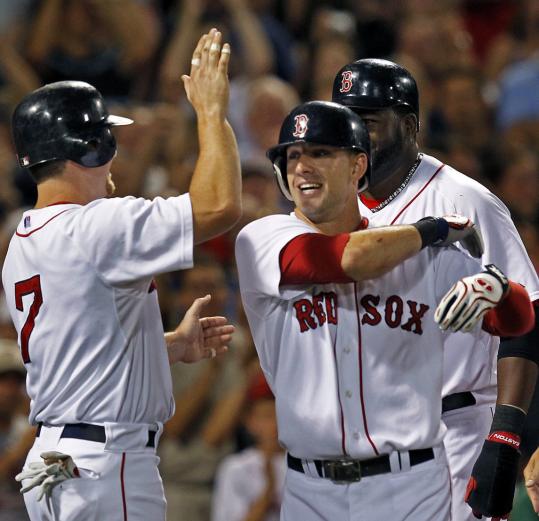 The Red Sox and their fans were happy to see Dustin Pedroia return to the lineup last night. He didn't have the best of nights: o-for-4, got caught looking in his first at-bat and made an error in the field. But having the heart and soul of the ballclub back on the field is what counts. The 4-for-4s will come soon enough.

Ryan Kalish blasted a grand slam off Jered Weaver in the fourth, after the Sox grabbed a 1-0 lead in the third against the Angels on a blast across Lansdowne Street by Darnell McDonald. The ball actually went through the back window of a car parked in the lot across the street. Send the bill to the Red Sox.

It was Kalish's second home run of the season, and he continues to impress in the field and at the plate. He was in center last night, in place of the recently DL'ed Jacoby Ellsbury. The Red Sox will issue a statement today about his recently fractured rib from last Friday night in Texas, and the feeling is is that this may shut Ellsbury down for the season. And now, you have to wonder if we've seen his last game in a Red Sox uniform.

Clay Buchholz was again terrific last night. He won his 14th game of the year and lowered his ERA to 2.36, and that leads the AL. He went seven innings, allowed no runs on seven hits while striking out three. Felix Doubront loaded the bases in the 8th but escaped with a strikeout, and Michael Bowden pitched a 1-2-3 ninth inning to cap the 6-0 shutout.

New York and Tampa Bay both won easily as well, so the Sox trail both teams by 5 1/2 games.
Posted by The Omnipotent Q at 10:55 AM

I want an 8-1 homestand. Lackey pitched better than his line indicated (and he was winning pitcher) so no we have 4 of 5 starting pitchers grooving. Want to see Beckett get it going so we can go on a 2007 Rockies-esque type run to end the regular season (of course the 2007 Rockies elicit fond memories for me :)

If both Lackey and Beckett can show some consistency, it will give the Red Sox a fighting chance despite the losses of Youk and Ellsbury.