Made Me Proud To Be a Red Sox Fan 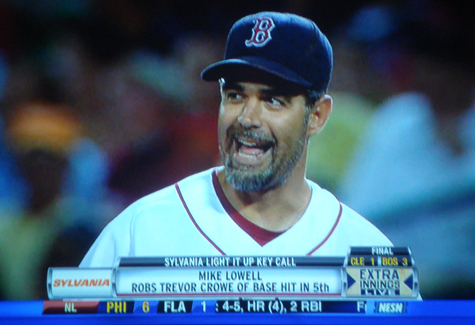 It looked like something out of a Hollywood movie.

Mike Lowell got a standing ovation in his first at-bat at Fenway last night, and he rewarded the fans with a two-run blast on the first pitch to left that wound up putting the Red Sox ahead to stay over the Indians in a 3-1 victory. (With thanks to Surviving Grady for the use of the above photo.)

Seeing the fans give Mike such a warm welcome in his return from the DL really made me proud to be a Sox fan. They never cease to be the classiest fans in the game.

Josh Beckett pitched eight terrific innings, allowing just a solo home run to Lou Marson. He retired the last 14 hitters he faced. The game got chippy in the 8th, when Adrian Beltre had a pitch thrown behind him by Jensen Lewis to begin the inning, this after David Ortiz had a pitch thrown behind him the previous inning. Two Indians batters were hit earlier by Beckett, but it seemed over when Papi was missed by Justin Germano in the 7th.

Both benches emptied and it looked like both teams were going to go. Beckett wanted to get at future gym teacher and lunatic Shelley Duncan, but they were kept separated. Beckett sure had the look of wanting Duncan's head on a stick, and I sure wouldn't want to have him for an enemy. Terry Francona and John Farrell both had strong words for Indians coach Steve Smith and they both looked like they wanted a piece of him, too.

When everything calmed down, Lewis and Beckett were both tossed. Jonathan Papelbon was coming in for the ninth anyway, and got the Tribe 1-2-3 for the win. Tampa Bay took over first with a win over Minnesota, and New York dropped their third straight and are now in second. (Don't you just love all these stories about Slappy being stuck on 599 home runs??)

With the status of Kevin Youkilis unknown at this time (will he have surgery that will end his season?), Mike Lowell filled in for him at first and gave the fans a thrill. Jacoby Ellsbury will be activated on Wednesday.

BTW, we all know the Red Sox are America's best sports fans. But now, it has been confirmed by Forbes Magazine. Something else that makes me proud to be a Red Sox fan.
Posted by The Omnipotent Q at 2:14 AM

I love Mikey and we were up and cheering last night when he clubbed that sweet tater. This game had EVERYTHING!

Sure did, Peter. Keep the faith!