No More Excuses, It's Getting Late 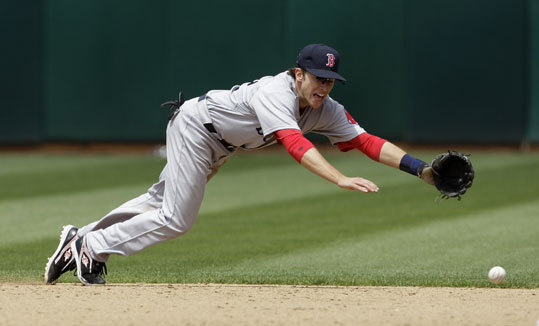 The Red Sox put their fans through a dreadful 6-4 loss to the weak-hitting Oakland A's yesterday and lost the series to them.

It's what I feared. A series loss to open a very important road trip.

Clay Buchholz was clearly rusty upon his return from the DL (and once again, thank you, interleague), allowing five runs in four innings. You know he wasn't himself when Matt Watson, who hadn't had a hit in MLB in five years, took him out of the park yesterday. Jed Lowrie (pictured) made his return as well, going 1-for-2 with a walk, RBI and a run scored.

But once again, the Sox wasted a golden opportunity early on. They got one in the first, but left the bases loaded. And David Ortiz continued his struggles since the All-Star break, as he is now 3-for-25 with 10 strikeouts.

With the exception of Adrian Beltre (3 HRs in the last 6 games), the offense has looked stiff. Almost no spark in Oakland, and now they must right the ship in Seattle, against one of the worst teams in baseball. And the Sox have the good fortune of missing Felix Hernandez, who pitched yesterday against the White Sox.

New York and Tampa Bay both won yesterday, so now the Red Sox are 7 games out, and 4 1/2 games behind Tampa Bay. I'm beginning to believe that the Sox need to take 3 out of 4 this weekend. A split might not gain them anything.

BTW, a familar face beyond the left field wall is getting a makeover.

The Red Sox also sent Dustin Richardson and Daniel Nava back to Pawtucket, and DFA'd Ryan Sheely, to make room for Buchholz, Lowrie and Jeremy Hermida, who will be activated today.

And was it surreal watching Fenway Park turned into a soccer stadium last night or what? I caught NESN's coverage on FSC last night, with the main cameras at the Green Monster. Seeing the rightfield stands from that angle all night was truly bizarre. Celtic won the match over Sporting Lisbon by penalty kicks after a 1-1 tie.

My condolences to the family and friends of former Red Sox manager Ralph Houk, who died yesterday at the age of 90. I salute you, Major...
Posted by The Omnipotent Q at 11:35 AM