Ending The First Half In Style 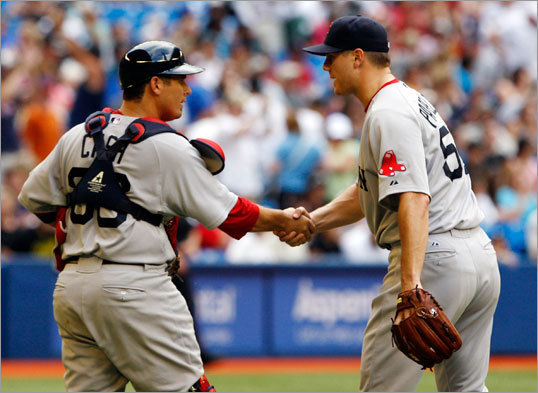 For the first five innings of Sunday's Red Sox game in Toronto, it had all the feel of one of those "Let's get this game over as fast as possible so we can go on our break" type of games.

The Red Sox didn't get a hit off of Toronto starter Jesse Litsch until two outs in the sixth. (I thought that was a good omen, as the Mariners were no-hit for 5 2/3 innings last night by Javier Vazquez until Ichiro Suzuki broke it up, and the Mariners went on to win.) It was a double by Marco Scutaro. And Darnell McDonald followed that with a two-run shot to left. David Ortiz followed that immediately with a dong to right, and all of a sudden it was 3-0, Sox.

Daisuke Matsuzaka pitched very well, allowing just four hits and no walks through the first six innings. But the first two men reached in the seventh, with a home run by Aaron Hill making it 3-2.

The day was over for Dice-K, and Daniel Bard came on for two perfect innings of relief, and Jonathan Papelbon got the first two hits on flyouts on the first two pitches. Can't remember the last time he did that. But Lyle Overbay singled to keep the game going. But John Buck popped to short to end the game and give the Sox two of three in Toronto and end the first half at 51-37, five games behind New York and three behind Toronto.

Now it's time to rest and get healed, and on that front, Josh Beckett pitched well in his rehab start for Pawtucket today.
Posted by The Omnipotent Q at 8:04 PM