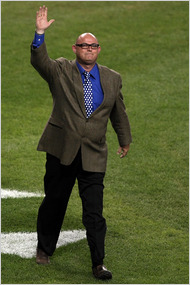 Word has gotten out that Ronan Tynan, the Irish tenor who got into a mess of trouble last year when he utter a not-too-flattering remark about Jewish women, has left New York City and is currently moving to Boston.

Tynan insists that what he said was misunderstood, but the Yankees gave him the boot from singing his "extended versions" of "God Bless America" at Yankee Stadium, beginning with last year's playoffs. (And didn't they always seem to take forever?)

Now, he has found life in New York very difficult, according to the New York Times. Tynan says he's gotten a lot of hate mail and even death threats after his alleged remarks were made public. He's sold his apartment in New York and now plans to make Boston his home.

I hope the Red Sox don't get some kind of crazy ideas about letting him sing at Fenway Park. The Sox have had plenty of fine musicians at Fenway, like James Taylor and Dropkick Murphys, belting out the tunes. There are plenty of ways the Sox can stick it to the Yankees, but I hope they don't think that bringing in Tynan for "God Bless America" is a good idea. Is Tynan truly a bigot? I don't know for sure, but he's gotten too much bad publicity recently for this to be anything but a silly publicity stunt should he be invited to sing at Fenway.
Posted by The Omnipotent Q at 9:18 PM

Bringing Tynan into sing would be JUST the thing Dr. Charles Steinberg would do if he comes back to the Sox...UGH...

I don't think Dr. Charles would do that, Christine. I met him a couple of times at the BLOHARDS meetings and he's a good guy.

Yes and we always have Boston, J. Giels and Aerosmith also in line. (New Kids on the Block - I don't think so)