Nomar Retires, With the Red Sox 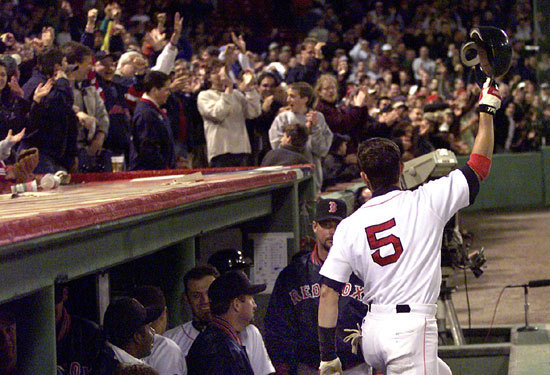 As expected, Nomar Garciaparra is finally calling it a career, and he is signing a one-day minor league contract with the Red Sox for today, and retiring at a press conference in Ft. Myers.

His next stop after this will be as an analyst for ESPN. 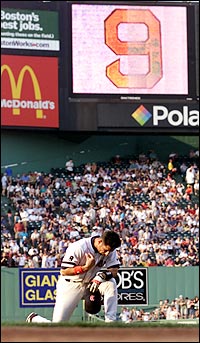 He won two batting titles, in 1999 and 2000. On May 10, 1999, Nomar hit three home runs, including two grand slams, driving in 10 runs in a 12-4 win over Seattle. He seemed to have the world at his feet, and looked like he was on the road to the Hall of Fame, and had the immortal Ted Williams as his biggest fan. But he suffered a wrist injury late in 1999 season (remember when he got plunked by Al Reyes?) and he needed surgery before the 2001 season and played in just 21 games that year.

But Nomar bounced back with a vengence, and had two tremendous seasons in 2002 and 2003. But injury concerns, as well as his possible walking away as a free agent overshadowed his 2004 season. And on July 1, 2004, he was seen to be "moping" on the Red Sox bench as they played an intense game with the Yankees in the Bronx, and it was perceived by many that his time in Boston was coming to a close. Many Red Sox fans seemed to turn on their star.

And on July 31, Theo Epstein became the loneliest man in New England, when he dealt Nomar to the Cubs in a three-way deal for Orlando Cabrera and Doug Mientkiewicz. That's the deal that solidified the Red Sox defense, and the Sox were on their way to making baseball history. It led to some hard feelings on the part of Nomar and the Sox management.

And Nomar's career seemed to fall off the rails.

He had one superb year with the Dodgers in 2006, even making the All-Star team. But injuries kept coming, and he could never get the magic back. He was given standing ovations, ones he richly deserved, on his Fenway Park return with Oakland in 2009. He was back in the good graces off Red Sox Nation.

So, now at the age of 36, Nomar Garciaparra calls it a career.

It was a really classy move on the Red Sox' part to bring him back for his retirement. I wish Nomar all the best as he enters his new life as a baseball analyst.

Thanks for the memories, Nomar. You were always "better."
Posted by The Omnipotent Q at 11:39 AM

Yes I was very saddened at the time of the trade (but not obviously later that October :) Never to this day really understood to what extent his injuries truly were in 2004 (he was supposed to be totally fine by Opening day)

Very nice of Sox management to tender the contract and let him retire as desired. Class.

Read CHB today, naturally someone had to throw cold water on yesterday's announcement. He can't get it through his head that fences have been mended between Nomar and Sox management. This may sound drastic, but more and more I wish someone would put a bullet in that guy's head.