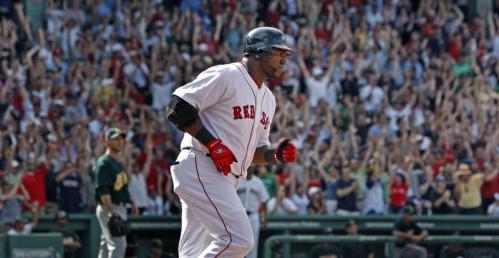 Yep, they played baseball at Fenway yesterday, and the Red Sox salvaged a split, 8-5, over Oakland of a four-game series.

Jon Lester struggled, allowing four runs in five plus innings. The Red Sox faced yet another Oakland rookie, Gio Gonzalez, and had him on the ropes in the first, loading the bases with one out. They got just one run, on a Jason Varitek single. Oakland came back and got four off Lester in the sixth, and the very real possibility of losing three of four at home to one of the AL's bottom feeders was a real possibility.

The Sox rallied, scoring two in the sixth, and got a 6-5 lead on David Ortiz' 14th home run, a bomb to right center. They added two more in the eighth, and Jonathan Papelbon came on to get his 26th save in the ninth.

New York lost in Chicago to the White Sox, so the AL East lead is now back to 2 1/2 games.

And the clock now ticks down to 4 PM, as the trade deadline is now fast approaching. I'll be glued to my TV as it arrives. I'll bet money now the Red Sox do something significant.
Posted by The Omnipotent Q at 8:56 AM