It's Not Just a Job, It's An Adventure 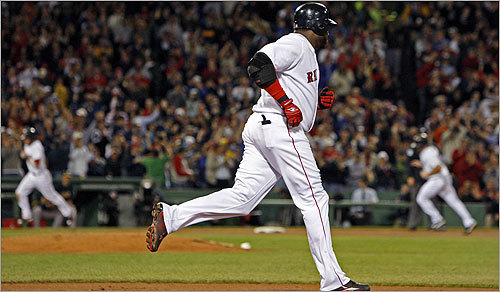 Seems like nothing at all comes easy with Jonathan Papelbon these days.

He opened the ninth with a walk and a single. When the ball left next batter Scott Hairston's bat, the flight of the ball made it look like 6-5 Oakland was about to happen. But the wind was blowing in and knocked the ball down, allowing Jacoby Ellsbury to catch it on the track in left-center.

That made it 5-4. One out later Kurt Suzuki single and that brought up the dangerous Jack Cust. On 3 and 2, Pap brought the heat and struck him out to end the game for his 22nd save and it gave the Sox a series win over the A's.

Yep, nothing comes easy with Papelbon these days. It's the 13th time this season that Papelbon has had to throw at least 20 pitches in an outing, and he's now walked 18 in 37 innings. It's way above his lifetime numbers.

At first it looked like another one of those frustrating nights, like Monday. Another Oakland rookie pitcher, Trevor Cahill, allowed just one hit over five innings. The Sox offense looked dead, making this kid look like another 20-game winner, and in bad need of the All-Star break. But finally Cahill faltered, giving up a mammoth blast to J.D. Drew, and two batters later, an equally prodigious home run to David Ortiz, his tenth of 2009, a three-run shot.

Tim Wakefield pitched another gutty game, as he went six innings, scattered ten hits and allowed just three runs. (It really should have been just one, as Nick Green missed second base on a DP attempt when Mark Kotsay whipped the ball to second to try to double up Bobby Crosby after making a great catch. The inning should have been over, but Oakland went on to score two more runs. Doesn't Green believe in tagging runners?) Wake was in trouble early, but pitched out of some tough innings for his 11th win of the season. A nice way to end the first half for him going into his first All-Star appearance.

Our old friend Nomar Garciaparra made another appearance last night in the eighth inning as a pinch-hitter. He received another rousing ovation, but didn't acknowledge it this time. He popped out to first on the first pitch. (We'll see him again at Fenway later this month, as the A's return for another four-game series.)

Kansas City comes into Fenway Park for four games this weekend to wrap up the first half, beginning with Brad Penny taking the mound tonight.
Posted by The Omnipotent Q at 11:04 AM