Buchholz Opens Part 2 With a Win 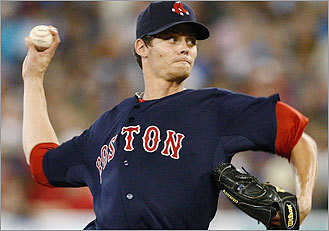 The Red Sox strategy of opening the second half of the season with Clay Buchholz pitching the first game against the Blue Jays paid off handsome dividends as he went 5 2/3 innings in leading the Sox to a 4-1 win at Rogers Centre.

Buchholz struck out three, and most of his outs were on the ground. He certainly made his case that he is no longer a minor leaguer, and that he belongs in the Red Sox rotation. He allowed just the one run, and the bullpen core of Daniel Bard (once again quite impressive as he struck out 3 of 4), Hideki Okajima and Jonathan Papelbon (another 1-2-3 ninth for the save, let's see that more often) shut down Toronto the rest of the way.

Kevin Youkilis belted a two-run shot in the first, and David Ortiz doubled in two in the fifth to provide all the offense Buchholz needed.

Buchholz immediately returned to AAA after the game. He will certainly be back and maybe even before September 1.

New York came from behind and beat the Tigers, 5-3, so the Red Sox maintained their three game lead in the AL East.
Posted by The Omnipotent Q at 11:31 AM