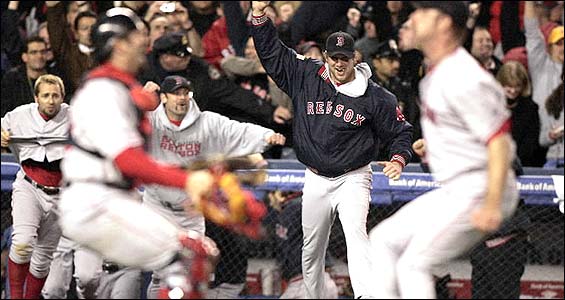 The Rangers were down 3-0 in the series to the favored Penguins, and the series returns to Pittsburgh tomorrow night.

I love how the media here in New York have mentioned that the 1942 Toronto Maple Leafs and the 1975 Islanders (against Pittsburgh) are the only NHL teams to come back from a 3-0 deficit in a seven-game series to win. (And the Islanders almost did it twice that year. They fell behind 0-3 against the Flyers in the next series and fought back to Game 7, only to fall in that game.)

But they have very convienently forgotten the last (and most famous) American sports team to come back from 0-3 to win a series of seven games. I have seen NO mentions of it in any of the New York tabloid papers. (I guess they are doing their very best to forget about it.)

The above picture should help refresh their memories.

It's the gold standard of all perceived lost causes, the mother of all comebacks.

Pull out the 2004 World Series video, Rangers. It should be inspiring.
Posted by The Omnipotent Q at 11:05 AM