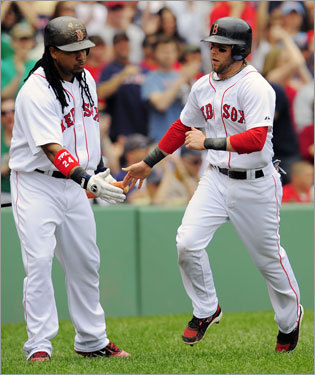 Josh Beckett had another rough outing at Fenway Park on Sunday, as the Milwaukee Brewers knocked him around for four home runs in seven innings. But the Sox had their hitting shoes on and outslugged Milwaukee, 11-7, to sweep the three-game series.

Commander Kick Ass gave up 5 runs last Tuesday night in Baltimore, so he has allowed 11 runs in his last two starts. Today's outing brought back bad memories of the pounding he took in 2006, as he allowed home runs by the truckload back then. But he did get the win today, as the Sox also hit four home runs, courtesy of David Ortiz (two), Dustin Pedroia (pictured) and Kevin Youkilis.

Also of note on Sunday was the fact that Jacoby Ellsbury was caught stealing for the first time in his young career. He had stolen 24 straight bases until Jason Kendall caught him on a pitch out. And Kendall's one of the best in baseball at throwing out runners.

Beckett's next outing will be on Friday night in Oakland, when the Red Sox open a ten-game road trip.

Manny Ramirez is still stuck on 498 homers, and hasn't hit one since the bomb he hit in Cleveland two weeks ago. I had guessed that Manny would blast number 500 on May 18th in a contest over at Jere's A Red Sox Fan From Pinstripe Territory before the season started. Oh well.

The Red Sox also announced that Justin Masterson will be brought up for his second start on Tuesday night, against Kansas City. After the game, he will be optioned back to the minors, and Bartolo Colon will be brought up to make his first start in a Red Sox uniform on Wednesday night.
Posted by The Omnipotent Q at 8:46 PM