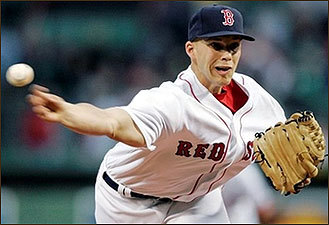 Justin Masterson (pictured) faced the unenviable task of trying to follow up Jon Lester's no-hitter last night, but certainly did himself proud, as he pitched 6 1/3 innings of quality work, allowing just one run on three hits (all by Alex Gordon) as the Red Sox beat the Kansas City Royals, 2-1, at Fenway last night.

It was just his second MLB start (I was at his first back on April 24), but once again Masterson couldn't have been better. He was brought up just for this one start from AA Portland, and he was sent back, not to Portland, but to AAA Pawtucket. He left the game in the 7th inning with the 2-1 lead.

Hideki Okajima struggled in the eighth, filling the bases on a double and two walks and getting two outs. Jonathan Papelbon came on to strike out Billy Butler to preserve the lead, and then got Kansas City 1-2-3 in the ninth to get his 13th save of the year. The Red Sox got two early runs off Gil Meche and made them stand up, as Masterson struck out five and walked three.

Bartolo Colon makes his first Red Sox start tonight, taking over Masterson's spot. BTW, have you noticed that three of the players the Red Sox offered in the Johan Santana trade talks last winter, namely Jon Lester, Justin Masterson and Jed Lowrie, have all made many significant contributions to the Red Sox this season? (Not to mention what Jacoby Ellsbury has done.)

As the old adage goes, sometimes the best trades are the ones you don't make.
Posted by The Omnipotent Q at 11:47 AM

Hey there John. Colon will prove to be the missing link in our great rotation, and he will be a huge reason for postseason success. What could be better...6 straight!!!!!

Good to hear from you, Peter. Colon gave the Sox five good innings last night. A good start so far. Let's hope it continues. Six straight after those two horrible losses in Baltimore...gotta love this team!